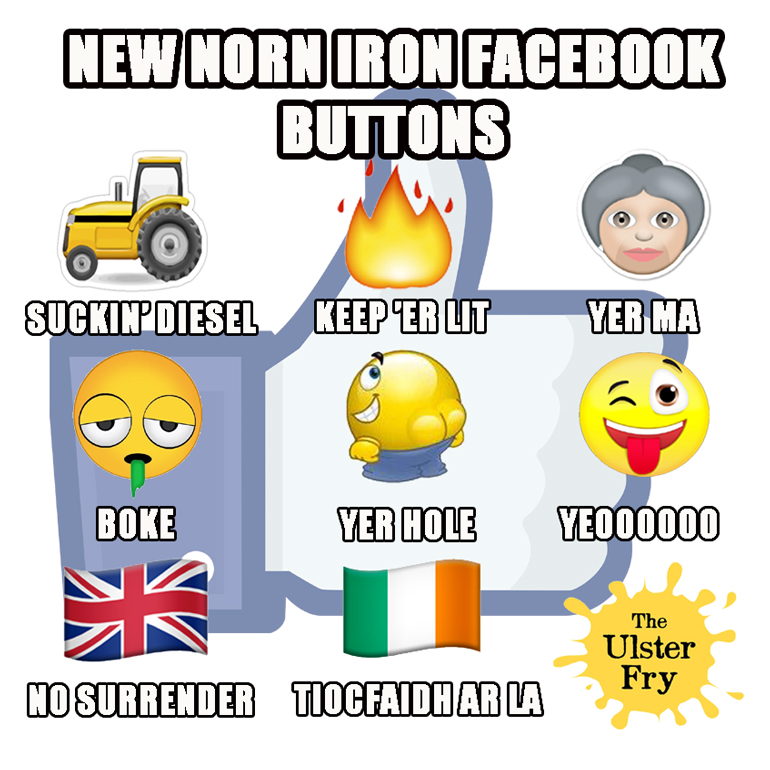 Social media giant Facebook unveiled a new range of buttons today, finally allowing its users to express emotions beyond a simple ‘like’.

The new symbols – Love, Angry, Sad, Haha and Wow – appear when you hold like down on a mobile phone or tablet, or hover over Like on a PC.

However Facebook chief Mark Zuckerberg was quick to acknowledge that the addition of these new symbols wouldn’t be enough for the complex emotions of Northern Irish users of the site.

“Aye we know you’ll want to be more abusive than most international users,” he told The Ulster Fry, “so I’ve got our tech guys to stick a rake of new buttons on just for you.”

“Your Culchie users will be delighted to see a ‘Suckin’ Diesel’ tractor,” Mr Zuckerberg continued, “and boy racers will be pleased they can now select ‘Keep ‘er Lit’ when they see a video of one of their mates doing a donut on the Glenshane. Personally I’ll be using ‘Yeoooooo’ a lot, especially when I see a picture of a doll with big diddies.”

Other options include the self-explanatory ‘Boke’, and ‘Yer Hole’ or ‘Yer Ma’ for when you feel a Facebook status might be stretching the truth. The boffins have also included Tricolour and Union Flags for people who hang around the Belfast Telegraph Facebook page complaining and criticising each other’s spelling.

As of yet there is no firm date for the launch of the new “Norn Iron Buttons”, as Mr Zuckerberg is still hoping for a ninth symbol.

“Aye, I’m waiting on ‘Take yer oil’,” he told us, before shouting “Yeoooooooo” and speeding off in a Vauxhall Corsa.