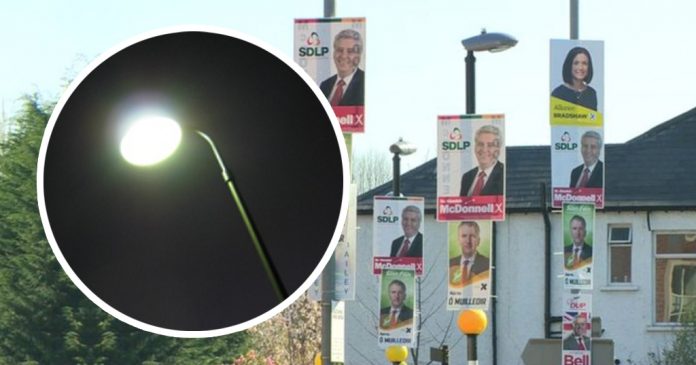 Hundreds of thousands of election poles across Northern Ireland are being converted into a network of interconnected street lamps that will allow people to see stuff after the sun goes down, the Ulster Fry has learned.

“We’ve spent millions installing these devices, often nicknamed ‘Clampetposts’ or ‘Arsepoles’, across the country in the last few decades” explained Cybil Cervantes from the Department of Infrastructure. “And whilst they enable politicians to stick photos of their bakes high above the streets several times a year – a think-tank of our finest minds began brainstorming what else we could do with them, as part of cost-saving measures”

“After years of R&D, we literally had lightbulb moment!” he explained.

The massive up-cycling project, which begins today, will see posters are removed from the structures for the first time in about 3,400 days – and fitted with light sockets instead, which will reportedly help people see stuff in the dark.

However in an ironic turn of events, bulbs for the sophisticated new lighting system will not be bought or replaced across most of the country, as the people’s who’s faces were previously on them aren’t actually planning to do any work – with no-one any the wiser when that situation might change.

“Our think-tank also concluded that it’s easier to keep everyone in the dark” added Cervantes.