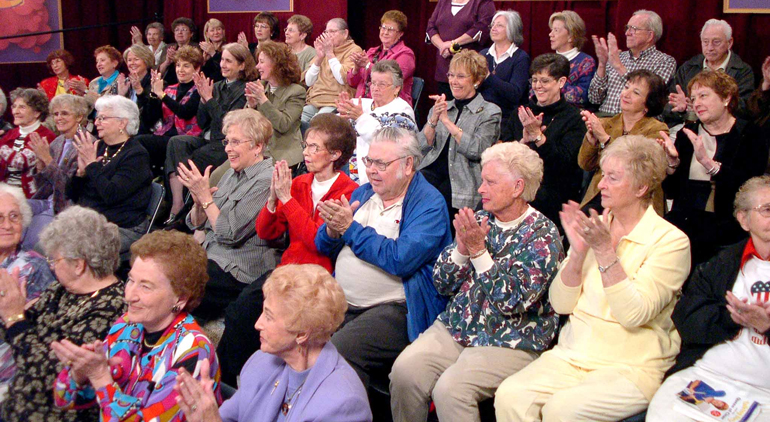 The entertainment world was united in grief today after the passing of Agnes Braithwaite, the woman described as having “the loudest laugh in show business.”

Born in 1952 to a working class East Belfast family, Agnes McIlroy, as she was then, first shot to fame in 1973 when she was heard laughing uproariously during a recording of a James Young comedy programme for BBC Northern Ireland. Such was her talent the star was forced to stop the recording, and for the next 20 minutes the audience watched Agnes laughing instead.

Such a talent needed a bigger stage, and a lucrative move to England was inevitable. Beginning on Dad’s Army, Agnes cut a swathe through British Television of the 1970s and 80s, lending her skills to shows such as George and Mildred, Allo Allo and Home to Roost. In 1982 she married Harry Braithwaite, himself an accomplished loud audience member, perhaps best known as “that man with the really loud cough off the snooker.”

The late eighties and nineties were not kind to Agnes’s career. In 1988 she suffered a serious injury whilst filming an episode of Last of the Summer Wine, when she almost choked on a Fruit Pastille whilst attempting a double cackle with squeal manoeuvre. A long lay off for recovery was necessary, and when she returned Agnes found that the rise of ‘alternative comedy’ had seen a corresponding fall in the need for laughter artists.

She moved to America with Harry in 1992, but the pair couldn’t replicate their UK success. Agnes was unable to adapt to the ooos, ahhhs and woos of the American sitcom audience, and Harry found that US sport has no place for a man who could cough loudly on demand. Disillusioned, the pair returned to Northern Ireland to live in their Ballywalter holiday home in 1997.

In 2008 Agnes made a triumphant return to the small screen when she was coaxed out of retirement by the Hole in the Wall Gang to provide ridiculous audience shrieking for Give My Head Peace, but the success was short lived. By then her previously prodigious talent was in decline, and she was unable to even raise a smile during successive series of Monumental and The Number Twos.

Agnes is survived by her husband Harry, their son Wilbur and daughter Simon. Her funeral is tomorrow at St Wayne’s Parish Church, Ballywalter.