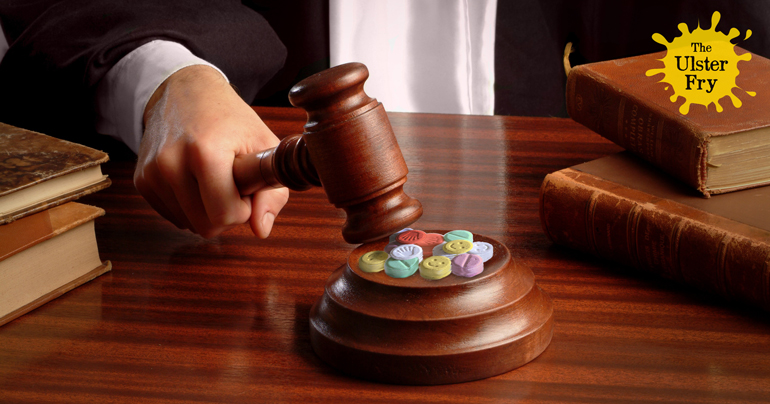 Northern Ireland is home to some of the hardest, most notorious criminals in the world. The following crimes may cause distress to some readers – especially people from Hillsborough.

62 year old retired housewife Enya Way appeared in court today after police were called to her local supermarket yesterday amid scenes of customer violence. Whilst not personally involved in the attacks, CCTV footage showed Mrs Way repeatedly stopping to casually browse shelves at the exact moment someone actually needed something behind her. Eventually other customers ‘lost their shit’ and starting battering each other with french baguettes and rolls of bacofoil. ‘People like you are dangerous and make me sick’ Judge Gildan McTavish told her. She was sentenced to 6 months of midnight shopping at a 24 hour Tesco.

There was drama at Newry courthouse this morning as 27 year old local busker, Terry Stringer, appeared before a jury charged with multiple counts of murder. Several ear-witnesses recounted how Mr Stringer had brutally killed several innocent songs in broad day light this weekend, including Radiohead’s ‘High & Dry’, ‘Firework’ by Katie Perry and ‘one of those annoying f**king songs by The Script’. He was found unanimously guilty and sentenced to 3 consecutive life sentences of winding his neck in.

47 year old cabbie, Bonsai Adams, appeared before Belfast magistrates today charged with a litany of vicious heat crimes at his Glengormley home. His wife Flora told the court that his distressing habit of leaving the front door open was ‘costing her a clean fortune’ and driving her ‘buck mad’. The taxi man pleaded guilty on 70+ charges of ‘letting all the heat out’ plus 40 lesser charges of ‘letting a wile draft in’. He was sentenced to two weeks community service pouring emergency home heating drums into people’s oil tanks whilst balancing precariously on a wheelie bin.

Finally, there were emotional scenes at Derry Courthouse earlier as 38 year old driver, Cautious McCafferty, stood trial for 17 counts of annoyingly stopping at empty roundabouts to triple-check that there definitely wasn’t anyone coming.  Using a diagram to explain, prosecution barrister, Exhibit A Doherty, showed how Star Trek teleportation technology was only possible in movies, and that inanimate objects such as cars couldn’t simply materialise in the middle of a deserted road. She was found unanimously guilty and given two consecutive life sentences following a learner driver.