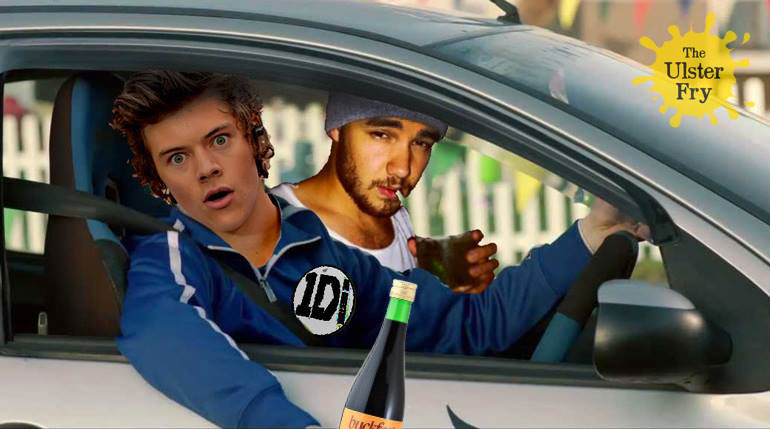 The chino sporting four-piece were due to perform in front of a sell-out crowd but ended up getting “wrote aff” on Buckfast, before joyriding around Belfast instead.

The Ulster Fry understands that the pop group left their hotel earlier that day and boarded a luxury tour bus. Rumours suggest that the driver got confused when they told him to take them to band practice. Instead of heading to the SSE Arena for rehearsals the coach driver took them to an Orange Hall in Dundonald.

The former X-Factor contestants spent the afternoon drinking and throwing band sticks with the Ballybeen Flute Band. As bass drummer Davy Girvan recalled, “We asked if they could use a flute but they thought we were offering them champagne the cheeky wee bastards. They weren’t bad fellas to be fair. It was really nice to meet Harry, Louis, Neil and Billy.”

The pop stars then headed to a local offy and spent the afternoon drinking copious amounts of tonic wine in the park. It then seems to have dawned on the boys that they were supposed to perform that evening so they waved down a taxi.

Liam Payne recalled, “We were ‘pure snattered’ as you would say here. We needed something to soak up the drink so we asked the driver to stop somewhere for a few doughnuts. The next thing, we’ve been dropped off in a place called Twinbrook and I’m dipping the clutch on a chipped Vauxhall Astra whilst a crowd of tracksuit clad youths shout ‘yeooo’.”

Whilst the other band members burnt out the stolen vehicles, Harry Styles fancied some more amorous action and made his way to a local bingo hall. Styles, 21, was last seen getting into a taxi outside Havelock House with broadcasting bombshell Pamela Ballantine.

However, the megastar released a shameful apology this morning. “I couldn’t see straight. I thought it was someone younger and much fitter,” said Ms Ballantine, before abruptly ending the press conference as she’d scheduled another laser eye surgery appointment.