Secretary of State confirms that bears shit in the woods 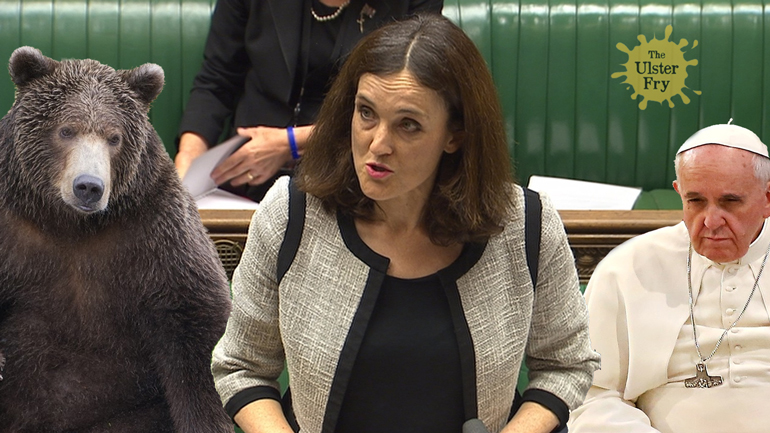 Northern Ireland Secretary Theresa Villiers today told the House of Commons that paramilitaries here are still armed, and that their members are still “up to shite.”

The shock revelations shocked nobody, with an estimated 95% of the population bewildered that the issue was ever in question. “You mean they were meant to have gone away?” was the incredulous reaction of most people, with the other 5% pretending that they thought all the paramilitaries had retired and spent their time doing yoga.

Ms Villiers went on to state a number of other really f**king obvious things. “The IMC have judged that the Pope is a member of the Catholic faith, and has been for some time,” she told MPs. “They also believe that the nights are fair drawing in, Freddos have got more expensive and traffic isn’t as heavy during the school holidays.”

Local politicians have reacted in their usual measured tones. “This is bollocks,” said SF President Gerry Adams, “The IRA disbanded ages ago and none of its members have had a shit in the woods in over 10 years.” PUP leader Billy Hutchinson was similarly scathing. “The UVF have left the scene for some time,” he told us, “all weapons were handed in and the former members have since devoted their lives to prayer and contemplation. Basically the UVF is now a kind of retirement organisation for Loyalist monks.”

Meanwhile Peter Robinson is going to be First Minister again, as now that the existence of the IRA has apparently been confirmed he feels that there is no need for his ministers to resign just in case the IRA exists.

“It doesn’t make sense to me either,” he told journalists, “but sure we’re all just making it up as we go along.”