O’Neill to attend Twelfth after Foster goes to GAA Final 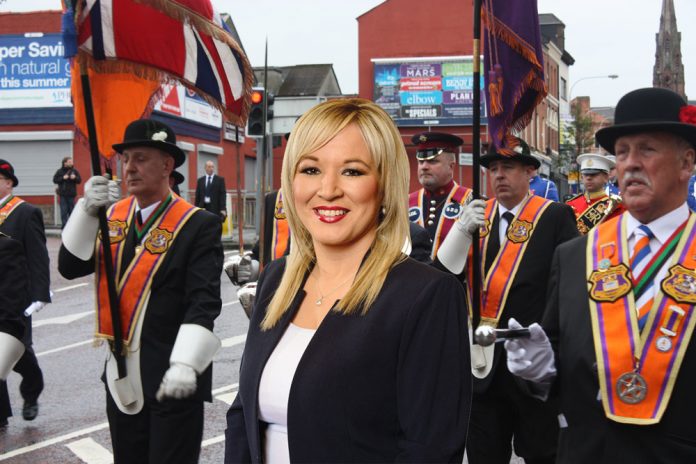 After DUP leader Arlene foster made an appearance at the Ulster GAA final, Northern Ireland’s other party leaders have all revealed plans to ”reach out” to their traditional opponents.

“If Arlene was in a Rocky movie, this’d be like a ‘let’s look liberal’ training montage,” says political expert Emma Lay. “Chasing chickens with Gay folk, doing one armed press-ups with the Muslims and punching frozen beef with the GAA. By the end of it all she’ll be punching the air at the top of the Stormont steps.”

Michelle O’Neill was first to make a move, revealing that she intended to travel to Donaghcloney for the Twelfth. “I’ve already put a couple of deckchairs out the front of the petrol station for me and Mary-Lou,” she told The Ulster Fry. “Gerry can’t make it, but he’s hoping to get to Scarva for the Sham Fight.”

Alliance supremo Naomi Long is to spend most of this week putting up flags along the Newtownards Road. “She still has the big flag off city hall, and the wee ladder she used when she took it,” said Alliance spokesman Sid Onafens.

With the SDLP and UUP leaders agreeing to swap jobs over the summer., only the TUV’s Jim Allister has run into problems finding someone to engage with.

“Jim hates everyone, so you’d think he’d be spoiled for choice,” says Lay, “In the end he’s agreed to spend 6 months arguing with his own reflection.”

As a result of these ‘engagement’ efforts, all the problems up at Stormont have been solved and power-sharing will restart next week.