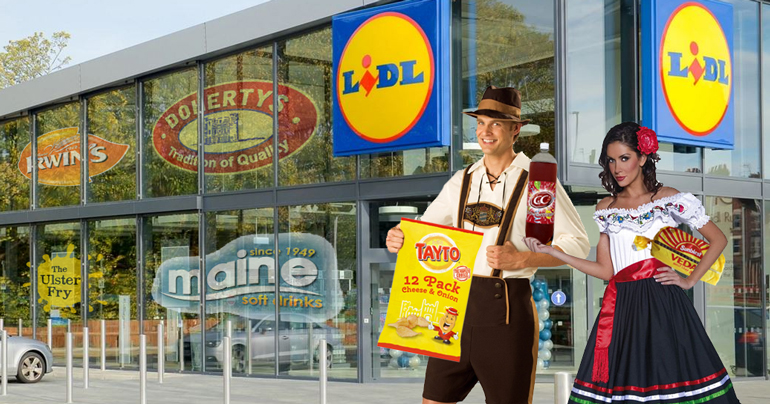 Whilst Ulster shoppers have long enjoyed buying unpronounceable foreign brands at Lidl, the supermarket chain has only just revealed that its stores on mainland Europe are conversely stocked with Northern Irish products that continental customers have never heard of.

But whilst shoppers from Amsterdam to Zurich can now be seen loading their trolleys with multipacks of Spicy Bikers, crates of Maine lemonade and Cookstown sausage rolls, it took several years before NI produce won the hearts of EU shoppers.

“Le first time I see a ‘pastie’ I was all like, what la actual fork!” admitted French shopper Philipe McEnnedy.  “But when I taste, c’est magnifique! Especially inside le ‘bap’!”

“It was, how you say… quare le packing?”

“Est iz only €2.49 for 24 dumpy bottles of Harp!” said an excited Estrella Damm from Barcelona. “Und if you buy 3 packs, you getz a free bottle of Buckie.”

But whilst Northern Irish food has proved to be a hit in Lidl’s European grocery areas, it’s the Ulster themed central homeware aisle, stocked by the Nutts Corner market, that had really taken off with shoppers.

“They are fantastisch fur keeping her lit!” he added.