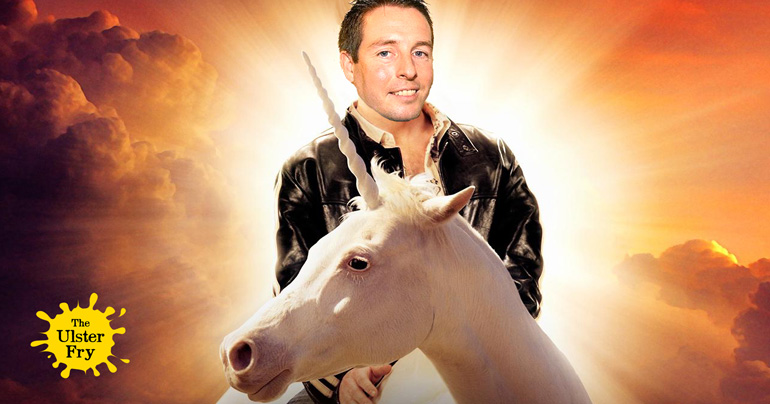 Following the news that outgoing Communities Minister Paul Givan allocated £25,000 of public funding to an Ulster Scots Society that didn’t even exist, The Ulster Fry has learned that several other imaginary local projects are now set to be realised at the tax payers expense.

“Wasting the public’s money on things they don’t really believe in is a long standing tradition of local government,” said Givan today at the launch. “So we’re delighted to announce that we’re pumping £100k of your dough into a new Unicorn Riding School outside Lisburn.”

“It’ll be absolutely state of the art, and include the world’s first Unicorn Solarium – which will, of course, be kept warm using the mysterious Renewable Heating Initiative!”

Other projects set to benefit from the windfall include the Bangor Mermaid Society, which has applied for £75,000 to have an access ramp and handrail installed along the marina, whilst the Warrenpoint Werewolves Club is getting £50,000 to fit revolutionary new lunar-panels on their roof for storing up moonlight.

However, Mr Givan has come under criticism from some imaginary sections of the community for letting his prejudices dictate funding choices.

“He hasn’t given us a bloody penny!” moaned Chucky Larms from the NI Leprechaun Society. “All we wanted was £40k to install a rainbow over the River Lagan for a few hours and he said ‘no’. Sure we’d have paid him back at the end!”

There have also been suggestions that Mr Givan’s failure to fund projects by some smaller mythical creatures had been led by outdated DUP policy.