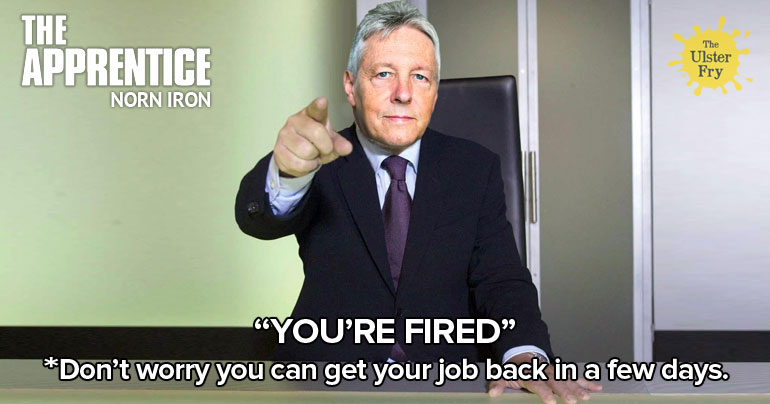 Fresh from a Stormont grilling about his alleged role in the £1.2 billion NAMA deal, it has emerged that DUP leader Peter Robinson is to build on his reputation as ruthless titan of industry by filling Alan Sugar’s shoes on a Northern Ireland version of The Apprentice.

“Initially we thought about hiring big Jim Megaw from the oul Stewarts & Crazy Prices adverts” said BBCNI’s Head of Annoying Programming, Paddy Donatello. “But no-one under 30 knew who the f**k we were talking about, plus the Ulster Fry reckoned it it was a whole handlebars trying to find a picture of him to photoshop into a humorous promo banner, so we didn’t bother our hole.”

Filming has already begun on the pilot series with insiders revealing that their eventual choice, Robinson, has a ruthless streak when dealing with contestants. “We’re actually a bit worried there might be some sexual harassment cases to be honest” admitted BBC producer, Leonardo McGlinchey. “Peter isn’t giving the girls a fair crack of the whip during team challenges. He seems to favour the Apprentice boys for some reason. We can’t get our head around it.”

So far the tasks have included a range of high level Northern Irish business related scenarios. “We’ve had them selling stuff at Nutts Corner market,” McGlinchey told us. “It all got a bit frantic toward the end with the boys team offering up to 10 lighters for a pound whilst the girls were practically giving away white socks at 6 pairs for a fiver.” Once the task is completed it’s back to Peter’s office for a grilling before he points the famous finger and says “You’re fired – but you can come back next week for a few hours then I’ll fire you again, for a bit.”

“The winner gets a cushy job as a highly paid special advisor” he added.

Far from damaging his reputation, it seems Mr Robinson’s alleged role in a deal which allegedly was worth 7 million alleged pounds to him has seen his alleged appeal soar amongst TV producers, allegedly.

“Aye we have him lined up for a new Norn Iron property show,” revealed McGlinchey, “it’s called Homes under the Nama.”