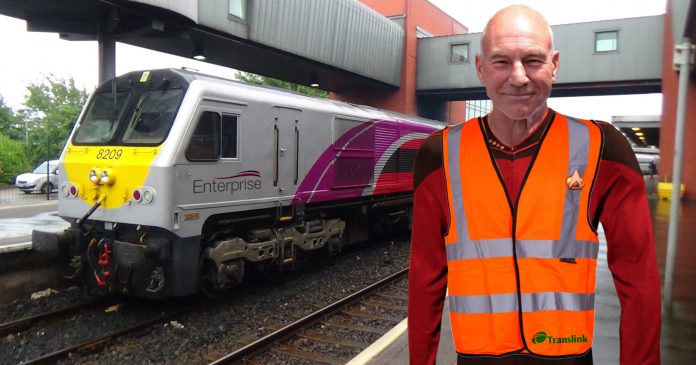 Rumours that Captain Jean Luc Picard would take the helm of the Enterprise again next delighted sci-fi fans this week as the first season of his hit show ended.

However in an unexpected twist producers have revealed that it will actually be the Enterprise train service between Belfast and Dublin – and not the iconic starship.

“With all this coronavirus worry we didn’t think it was safe to send a pensioner hurtling through space at warp-speed with a lock of young wans.” explained producer, Gene Dangleberry. “But your Enterprise barely gets up to 100mph and the driver sits away up the front on his own. So it’s perfect.”

“Plus he’ll get a free newspaper” he added.

Patrick Stewart is looking forward to returning home to Northern Ireland once again, following the sale of his family-owned supermarket business to Tesco in the late 90s.

“Playing the character of Jim Megaw was my first big break in showbiz” he told the Hollywood Reporter. “I got to wear a great wig, make a rake of TV ads and sell stuff for Crazy Prices. But once I got offered the Star Trek gig I knew it was time to move on!”

“I’ve been hopping around space like buck mad for years” he continued “so a nice regular timetable will be lovely. “

“Plus it’s only takes two hours” he continued. “Vulcan is 94 trillion miles away. It’s nearly easier to get to Tyrone”