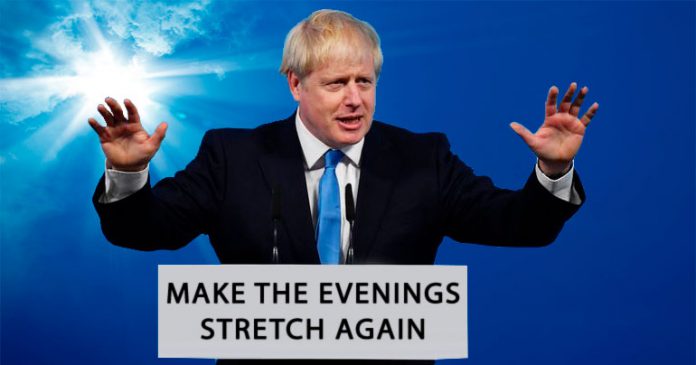 Prime Minister Boris Johnson has stepped in to reassure the nation that the annual quare stretch in the evenings will go ahead, regardless of the Corona Virus outbreak.

There had been growing concern in scientific circles that the quare stretch may be delayed by the strict government lockdown.

“We had been worried that this important phenomenon may in some strange way be put back, perhaps by weeks,” says the UK’s top scientist, Professor Brian Cock.

“We’ve seen the football season suspended and the Olympics postponed, so everything’s on the table. Who’s to say that Donald Trump wouldn’t try to persuade the World Health Organisation to transfer the entire quare stretch to the USA, for example.”

However the Prime Minister made it clear that resources are being allocated to what he described as “an important cultural and meteorological event, particularly among the Culchie tribes people west of the Bann.”

“I can assure you all that our top people are on the job,” he told The Ulster Fry. “As we speak, a team of experts is slowly elongating the evenings at a special facility in Hertfordshire, gradually adding the vital minutes needed to build up to a full, quare stretch.”

As a result of the intervention, the annual quare stretch in the evenings will be officially unveiled by German President Frank-Walter Steinmeier in a field outside Pomeroy on Sunday 29th March, at 6.30 pm.

No one else is allowed to attend.