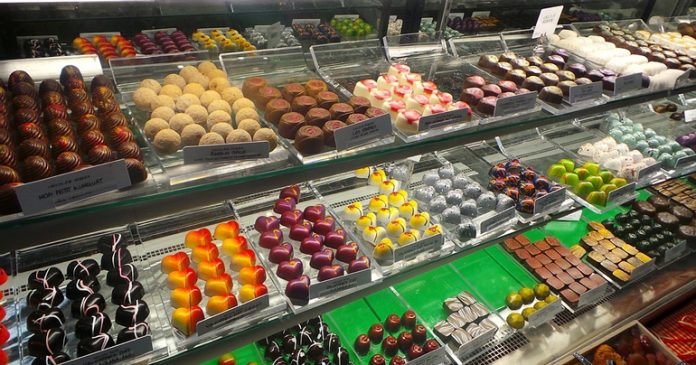 Police have launched a major investigation after thieves made off with sweets valued at over £35 million from the Belfast Continental Market Pick and Mix stall.

The officers believe that a “highly sophisticated group of criminals” carried out the audacious heist, targeting only high-end items.

“The Continental Market is famous throughout the world for its ridiculously expensive confectionery,” said Chief Superintendent Bertie Basset, from the PSNI’s Half-Serious Crime Squad. “Anyone who’s accidentally bought a quarter-pound of vanilla fudge from the vendors will know that their purchase can end up costing several thousand pounds.”

“These criminal masterminds seem to have been planning this heist for months,” he continued. “They’ve dug a tunnel from the toilets of Burger King, under Donegall Place and the City Hall lawns, before finally emerging just below the arse of Queen Victoria’s statue.”

Once inside the market the thieves ignored other ridiculously expensive items, such as glass cases full of over-priced knitwear and safes packed with carved wooden shite, making straight for the Pick and Mix.

It is believed they then filled holdalls with with millions of pounds worth of Macaroons, Turkish Delight and unusually shaped hand-made truffles that no one would ever dream of buying at other times of the year.

The PSNI has urged everyone to be vigilant.

“We urge everyone to be vigilant,” said Basset. “If anyone approaches you offering sweets that you wouldn’t normally eat but might fancy ‘because it’s Christmas’, please get in touch with your nearest police station.”