Politicians should “p**s off for a while”, claims latest opinion poll 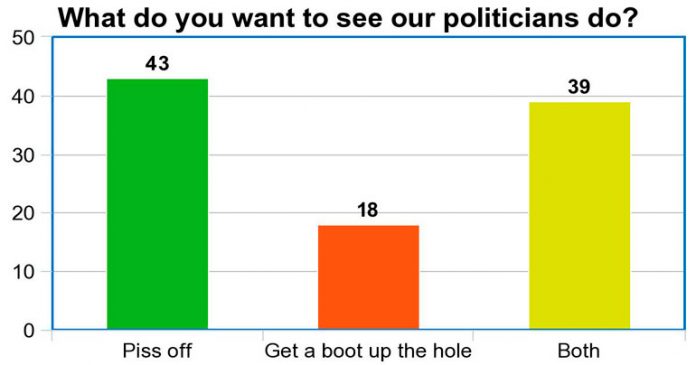 An new opinion poll has revealed that after the two recent elections most people are sick of the sight of our politicians and would like them to p**s off for a few months so they can watch normal TV programmes instead.

The poll, conducted by YouseGov on behalf of The Ulster Fry, asked 1000 random people a series of questions, then we made up the answers.

Astonishingly, 84% of the people surveyed said that they’d “had it up to their arse cracks” with watching the likes of Jim Allister and Martina Anderson slabbering at each other on current affairs programmes. Only 5% wanted to watch more of that crap and the remaining 11% didn’t know if their level of irritation had quite reached their arses, and weren’t prepared to guess.

When asked what they’d like our politicians do for a while, 43% said that they’d like them to just p**s off for a bit so we can all get our heads showered. 18% wanted to send them to an island where they could be ritually booted up the hole by the world hole kicking champion, and the remaining 39% wanted both things to happen at the same time.

“These are extraordinary poll results,” says the BBC’s Wanda Kopparberg. “It remains to be seen whether the politicians listen to the electorate and get to f**k, or will they just leave their photos hanging off lamp posts for a while and carry on sickening everyone’s pish as before.”

95% of the politicians we surveyed said that now the elections were over they didn’t really care what people think, and they hoped to be back shouting at each other on Nolan next week.