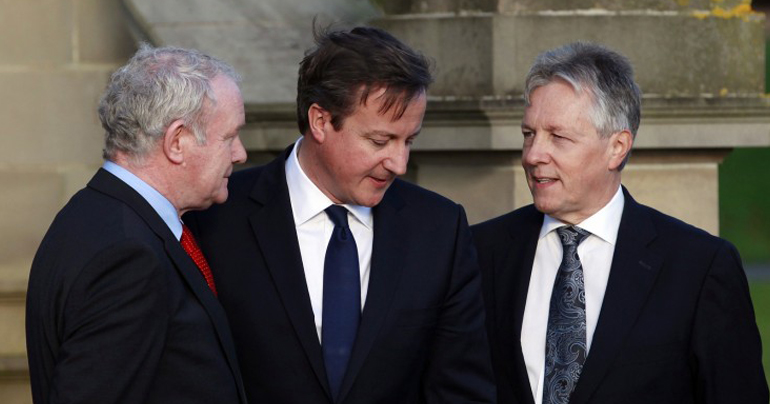 Citizens across the Province were left ‘raging’ today, after phones started ringing off the wall from companies asking them if they’d ever been mis-sold Payment Protection Insurance.

The calls started early this morning, after news emerged that Stormont chiefs had agreed to take a ‘sub’ from David Cameron, which will allow the power-sharing executive to build a shared future for Northern Ireland, simply by pouring money into it’s divided past.

The tactical masterstroke is understood to be the brainchild of Sinn Fein and the DUP, who have learned valuables lessons from past talks about the past, and now appreciate that future talks about the past need to get past talking about the future to solve the problems of the past – so we can all have a better future.

‘It’s so simple when you think about it’ added a source.

The terms of the loan are still being finalised, but it is understood that Northern Ireland will pay back the amount via direct-debit, in 48 monthly repayments. Cameron is understood to have denied the DUP’s request for a ‘payback hiatus’ during the July Twelfth marching season, a month long celebration which runs from around February until December.

Issues about the past have long been an issue in Northern Ireland, especially when people make an issue out of them. The rock band U2 learned this to their peril last week when, as reported by the Ulster Fry, they were heavily criticised for setting their new video during the troubles.

‘How dare U2 drag up our painful past when we’re trying to move forward towards a shared future’ remarked everyone on the street this morning.