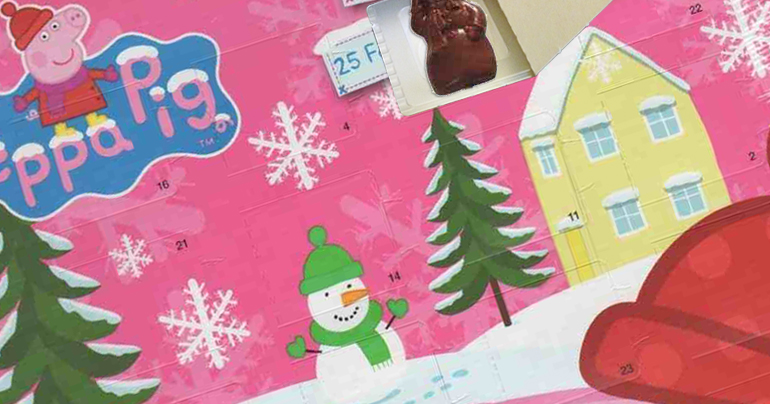 The residents of Lurgan were flung into a frenzy this morning after being forced to celebrate Christmas a day early.

The mishap occurred after local councillor William Street mistakenly ate the 23rd of December on the town’s Peppa Pig advent calendar on the 22nd, thus propelling the entire area one day into the future.

After he announced his error to the Lurgan press corps yesterday a stampede of shoppers rushed to secure last minute Christmas presents, in what has now been dubbed by locals as ‘Black Friday 2: Even Blacker’.

All of the town’s retail outlets are now closed after workers began destroying company property in fits of rage at suddenly finding themselves stuck in work on Christmas Day.

Townsfolk have complained that their lives are now ‘ruined’ as they will be forced to reschedule birthdays and appointments a day earlier for the rest of eternity. Steet has appealed for calm, reassuring people that a contingency plan is in place to reset the space-time continuum.

“Relax! We’ll stay in the future for another year, and then next Christmas I’ll eat the 1st of December on the 2nd, to take us back in line with the rest of Europe. Problem solved!”

Sadly this is not the first time Street’s incompetence has shaken the town. Many residents still haven’t forgiven him for a 2012 bungle which saw Lurgan undertake Movember in April.

‘Aye, growing a moustache over Easter was not much fun!’ admitted Street’s wife, Frances. ‘For either of us’