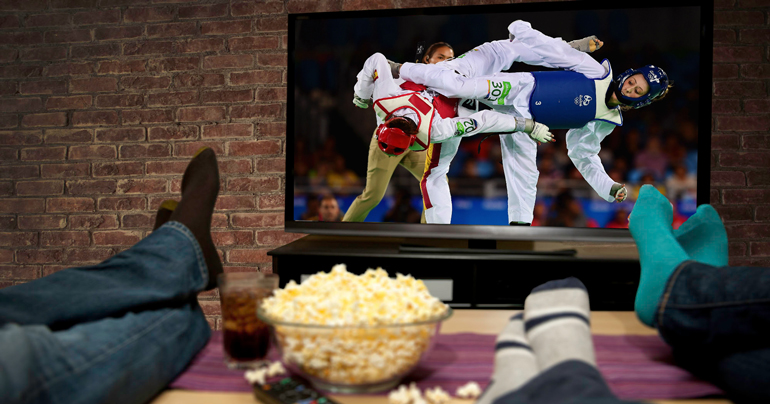 Everyone is looking forward to settling down and watching the normal shite that television channels spew out, after two solid weeks of watching annoyingly talented, healthy young people doing sport.

According to the University of Craigavon, Olympic fatigue began to set in at the end of week one after exhausted viewers sat up to watch Mo Farah and Usain Bolt over successive nights.

“Let’s face it,” says Professor Sylvia Meddle from the University’s Sports Science department, “there’s only so much time you can spend watching women fight each other in their pyjamas. Anyway if you want to see that you can go to Lurgan any Thursday morning.”

Most people we spoke to agreed with the report.

“I’m exhausted,” said Newtownabbey man Glen Gormley. “There’s that many f**king sports to follow. I did 10 laps of the living room on Friday, looking for the remote control so I could change channels yet again to see the women’s mixed doubles hundred metre diving or whatever the f**k it’s called.”

“Sitting on my settee shovelling Doritos into my gob while judging a gymnast for a shitty landing has become too much of an effort,” sighed Co Armagh housewife Sandra Gee. “Luckily Bake Off comes back on Wednesday, so I can gorb myself whilst slagging off some poor sod’s Chou Pastry instead.”

However, PSNI Chief Constable George Hamilton disagreed. “You bastards need to dry your eyes,” he tweeted, randomly, “If you don’t like watching the Olympics move to a different planet.”

We contacted the BBC for comment, and they agreed that there’d been a bit of Olympics overkill and that they too were looking forward to getting back to normal.

“Aye there’ll be a load of shit repeats and cheap reality shows coming back soon,” we were told, “probably in November, after we do a couple of months of Olympics highlights programmes.”