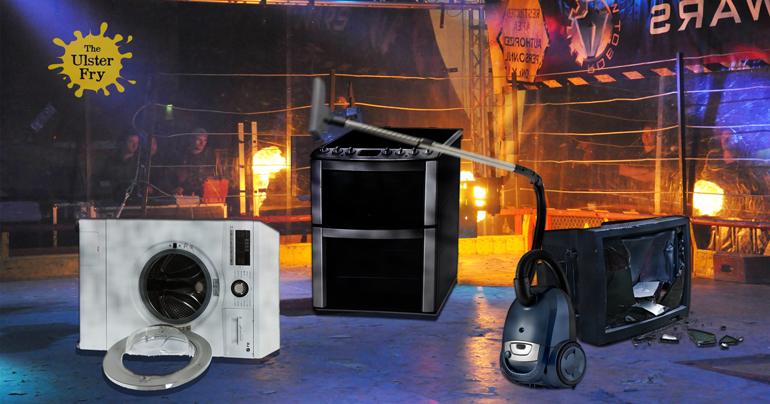 Cult TV show Robot Wars returns to our screens this evening, but has been given a radical revamp due to the demands of pedantic insurance companies.

“It’s clear that the extreme violence inflicted by the robots in the early series is unacceptable in the modern world,” says Health and Safety consultant Keith Lard. “There’s a very real danger of sparks causing scorch damage to audience members’ clothing, never mind the damage done to the robots themselves.”

The show’s producer Mickey Metal told us that there’d be many changes to the show’s format, but it would still be an entertaining spectacle.

“The House Robots have all been changed,” he revealed. “Sir Killalot is now an Indesit oven called Sir Cookalot with a vicious, flapping grill door action, and Shunt is now Suck – an old hoover with a death dealing hose attachment.”

“Obviously the viewers will see a big difference, but it’s opened up new sponsorship opportunities for us, with leading brands vying to have the most effective household appliance.”

However The Ulster Fry has learned that the new format has already had unforeseen consequences. During filming steam from a competing kettle caused the wiring in a George Foreman grill to overheat and then explode, spraying audience members with hot melted cheese.  The indecent triggered the studio’s smoke alarm causing the entire audience to flee the arena in terror.

So impressed were producers that the smoke alarm is now through to the live final.