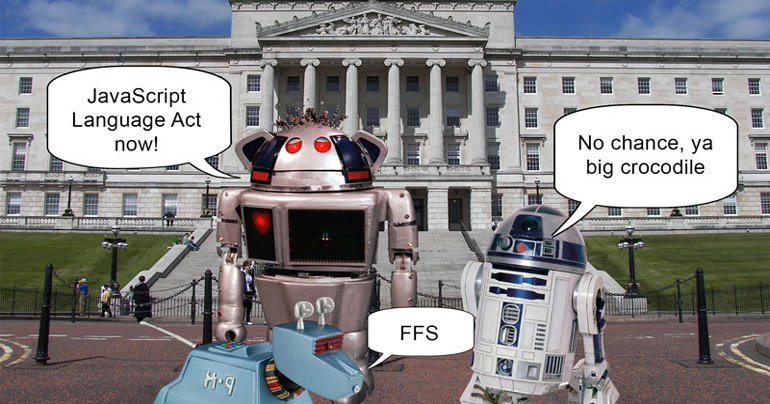 With the talks process grinding to a halt once again, presumably to give our hard-working politicians a well earned Easter Break, it has emerged that the British and Irish governments have turned to futuristic technology to fill the void left by our elected representatives.

“Robots are more than capable of performing dull, repetitive tasks,” says technology expert Tamara Sworld, “so it hasn’t been hard to programme them to continually argue over the same issues without ever actually achieving anything, and they’ll be a hell of a lot cheaper to run.”

The new metallic administration is due to take control from next Monday, however it seems that it may be as troubled as its humanoid predecessor.

“I will endeavour to serve all you pitiful humans as a fair and equitable overlord,” we were told by the new aluminium First Minister R-Lene 4*, in a weird robot voice you’ll have to imagine in your head. “However we will not consider allowing equal marriage for machines with the same attachments. If God had wanted two Henry the Hoovers to get married he would have given them different crevice tools.”

Deputy First Minister Me-Shell One-L, described by experts as “a Shinnerbot capable of communicating at 200 megabytes per second”, was also quick to draw a red line with her laser eyes. “We want to see legacy issues addressed by the British government,” she told reporters, before refusing to answer questions about the actions of her own party machines during the troubles.

Despite these setbacks, the British government remains optimistic.

“Sure we’ll just give it a week or two then set a new deadline,” said Secretary of State, James Brokenrecord.