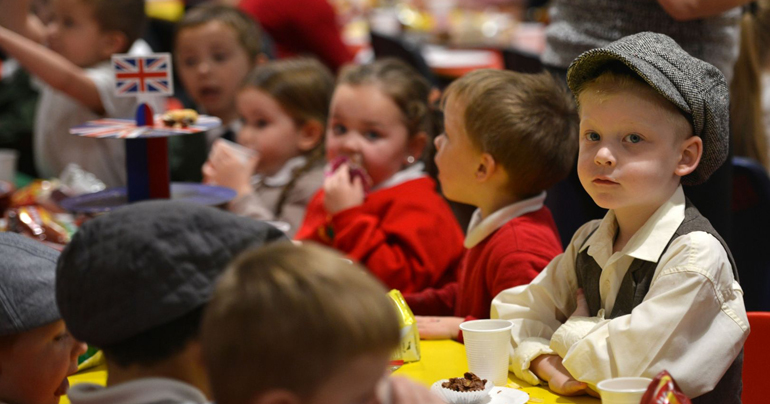 As arguments rage over the latest Stormont crisis, the British and Irish governments have stunned political observers by replacing the assembly with a random selection of small children from local primary schools, in the vague hope that they might actually start getting something done.

The new “School Assembly” took over the reins of government this morning, and immediately set about choosing an executive to take control of the various departments. “We chose Jack to be First Minister,” said 6-year-old Chloe, Chairgirl of the Agriculture Committee, “cos he is the tallest and can run really, really fast in races and he can sit on people.”

Jack’s best friend Michael has been installed as Deputy First Minister. “We’ve made Jessica from Mrs Kelly’s class the Finance one,” said Michael, “she is the best at sums and can count backwards from a hundred. Wayne will do Justice cos he has a cowboy suit with a sheriff’s badge and everything. Sarah is being arts and stuff cos she doesn’t go over the lines when she colours in.”

We understand that other ministerial positions were likewise filled ‘on merit’, although the appointment of the new Communities Minister was decided ‘by a farting competition’ – the same method used in selecting the previous post holder Paul Givan.

As of 6 o’clock this evening, the children had agreed a solution to the health crisis, with 7-year-old Minister Amanda Brown telling reporters that queues at A&E would be slashed because “you’re only allowed to see the nurse if you’re sick.”

The flags and parades issue has also been resolved and investment is being sought to improve transport, with new rail links served by large faced steam engines singled out as a number one priority.

Sadly however there was little progress on the RHI inquiry, with minister’s unable to reach agreement on whether to use Chinese burns or ‘diddy nips’ to get people to talk.