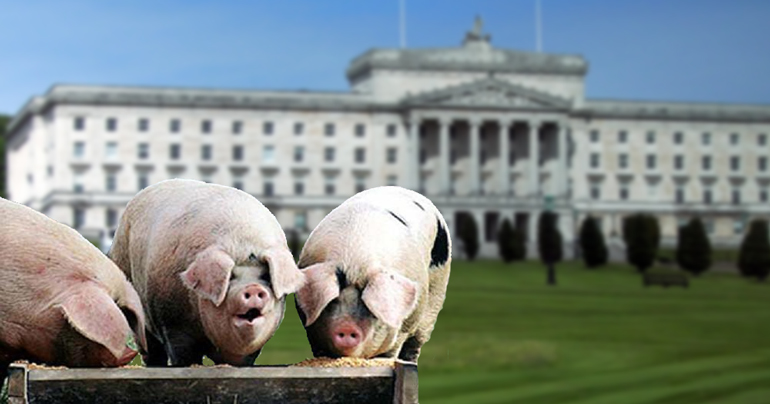 MLAs across Northern Ireland have got up off their arses briefly to breathe a sigh of relief after Secretary of State Karen Bradley announced that she might get round to asking them if they were willing to take a pay cut.

“I’m considering thinking about giving some thought to looking into legislation which will examine the possibility of perhaps cutting the wages of MLAs,” Ms Bradley told the House of Commons. “The result of this consideration will be put to consultation with all the main parties, then conveniently forgotten about.”

MLAs were quick to welcome the move.

“People out there don’t realise how hard I work in this constituency,” said North Antrim MLA Lieonma Hole. “Sometimes I’m in my office for up to three hours a day, kinda half listening to local complaints before doing nothing about them. It’s exhausting.”

South Down representative Bart Timer told a similar story. “I spend all yesterday afternoon pointing at potholes for the Mourne Observer,” he explained. “It was half-four by the time I got home so I nearly missed watching Pointless, which would have been ironic.”

Fermanagh MLA Lessie Shight also claimed that a wage cut would be unfair.

“It’s hardly my fault that we haven’t got an Executive up and running,” he told us. “All I did was play a key part in the negotiations then brief my party about the outcomes. Someone else is to blame, probably themuns.”

“Although it could be worse,” he admitted, “God help us if they ever bring in Performance Related Pay.”