Trump-Kim talks to be held on Castledawson Roundabout 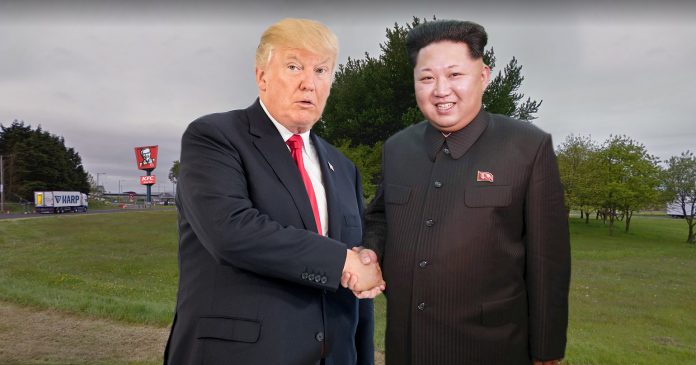 In what has been hailed as a major breakthrough in East/West relations, US President Donald Trump is to fly to Northern Ireland to meet his North Korean counterpart Kim Jong Un.

It is understood that diplomats have arranged for the high level talks to be held in the middle of the Castledawson Roundabout, in a symbolic gesture of goodwill.

“You have to remember that in the states, North Korea is in the West,” said US diplomat Randy Auldget. “I’m not sure how it works, something to do with the world being round, so where better to meet than Castledawson? Smack bang in the back arse of nowhere.”

The UN’s North Korean Ambassador Wan Long Fart told us that the Roundabout was the ideal place for their discussions.

“We will be able to raise many issues, like why we have no trains West of the Bann, and why themuns in Belfast get everything,” he said.

“We’ll probably talk about other shite, like nuclear weapons, but more importantly Ditty’s bakery is right and handy.”

“Our glorious leader is wild fond of a nice sassige roll, so he is, and its name sounds a bit like diddies.”

When we suggested this to Mr Trump he reacted angrily to the development. 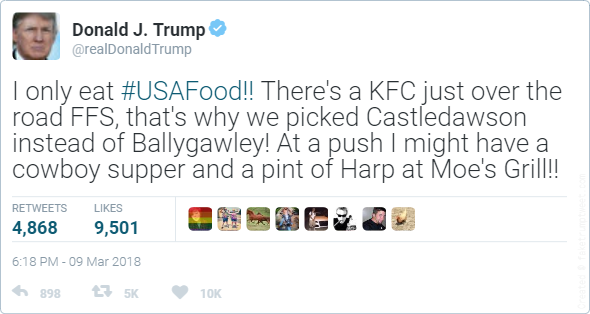 As a result of this exchange the talks have been called off and a full scale nuclear war between the two countries started five minutes ago.