SF and the DUP agree to stay together for the sake of the children. 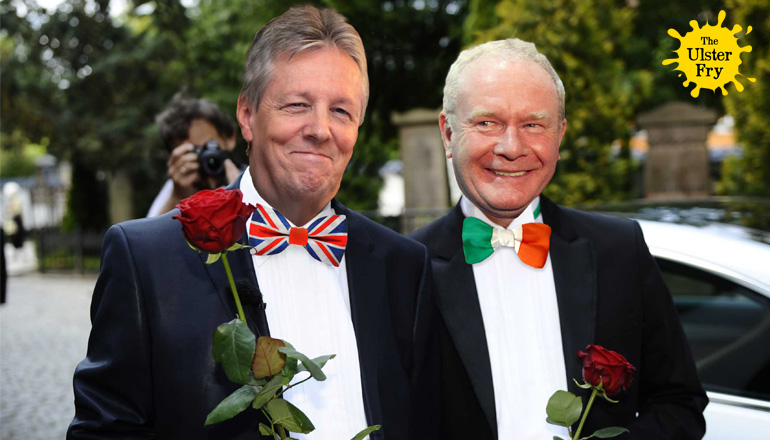 After ten weeks of intensive relationship guidance, Peter Robinson and Martin McGuinness have agreed to patch things up and give their marriage of convenience another go.

Speaking to a packed Stormont news conference, Mr Robinson told reporters that he and Mr McGuinness had been through a rocky patch, but were ready for a fresh start.

“Things haven’t been easy,” he admitted. “We’ve been having a few financial problems that put a strain on our relationship. Then it turned out that Martin was seeing some doll called Amy Council on the side, and had been for some time.”

“He’s agreed to cut all ties with her, so I’m willing to give it another go.”

The couple have revealed that their families are delighted with their news. Peter’s Auntie Theresa was at the news conference to say that she’d be giving the couple a £500m windfall to help them move on, whilst Martin’s Uncle Enda in Dublin has chipped with £75m to help him finish tarmacking the road between Derry and Strabane.

However they admit there are still a few difficult issues to resolve. Events of the past still loom large in the background, and Peter’s family tradition of redecorating the house with flags every summer remains a bone of contention for the McGuinness clan.

The couple’s three children, Mike, Colum and David, are said to be a bit unsure what to make of it all. Colum and David say they’ll think it over tomorrow, but there are fears that little Mike might throw his toys out of the pram.