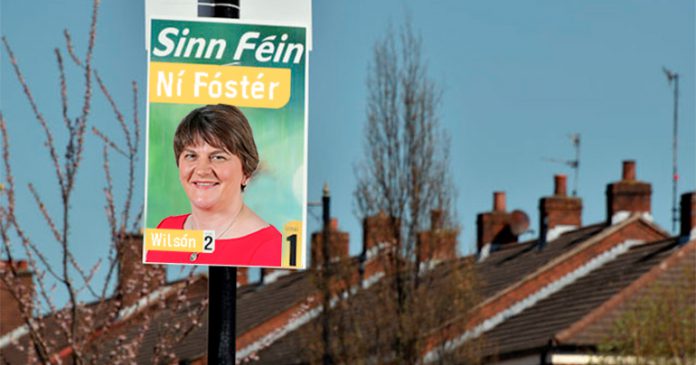 DUP leader Arlene Foster has stunned her supporters by admitting that both she and her party have been secretly campaigning for a United Ireland for decades.

The First Minister told reporters that she’d been inspired by Philip Schofield’s decision to talk openly about his sexuality, and decided it was time that she came out of the Republican closet.

“If you look carefully, the signs were all there,” she explained. “From our opposition to extending UK wide rights to Northern Ireland, to the RHI scandal, you should have been able to see that we were wearing down support for the Union, especially in Great Britain.

“Then, of course, the big one came along – Brexit. A lot of you must have thought we were pretty stupid to back something that weakened our position in the UK, but that was the plan all along!”

The announcement was followed by an equally shocking admission from Sinn Fein, as Gerry Adams confessed that his party had been secretly promoting Unionism for decades.

“A blind man could see that blowing stuff up and killing people wasn’t likely to bring about an ‘Ireland of equals’,” he told journalists.

“Sure remember the time we put Martina Anderson in charge of ‘reaching out’ to Unionists? You may as well give Jimmy Nesbitt responsibility for drinks rationing at a Frampton fight.”

As a result of the revelations, both parties will now swap political designations at Stormont, Gregory Campbell will address all future Easter Rising commemorations and the Rising Sons of Gerry Kelly will lead the parade at the Belfast Twelfth.