“No such thing as Climate Change,” says Greta Thunberg, after Katesbridge visit 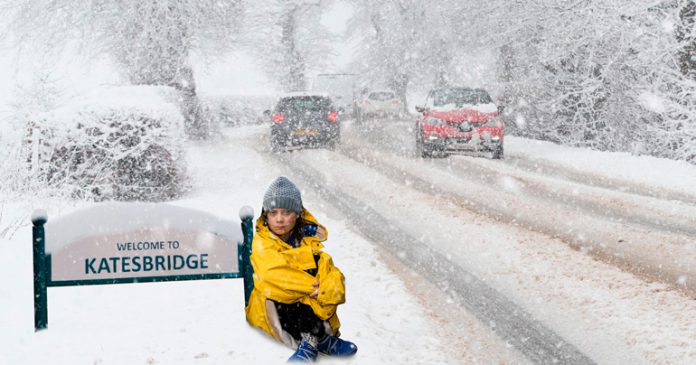 Environmentalist Greta Thunberg has admitted that she could be wrong about Global Warming after she accidentally found herself in Katesbridge this morning.

The Ulster Fry has learned that the controversial activist was in the area to deliver a speech on Climate Change at Rathfriland University, but took a wrong turn after parking her yacht in Corbet Lough.

“This was all wrong, I shouldn’t have been there,” she told delegates after eventually reaching the lecture hall. “We took a left onto Kilkinamurry Road instead of heading on into Moneyslane.”

“I have never been so foundered,” she continued. “How can our planet be warming when Katesbridge is so cold? Its people are freezing and yet you do nothing?”

Top meteorologist Barra Best, who was also at the conference to look handsome and occasionally talk about the weather, was forced to step in to explain the “Katesbridge effect”.

“Katesbridge is right beside the back door of the planet,” he told her. “Every winter, there’s a wild draught and temperatures plummet to minus 100 or something.”

As a result of Ms Thunberg’s announcement, President Trump, Sammy Wilson and a host of other old men who are offended by her every word have decided that Global Warming might actually be happening.

“I don’t believe a word a wee girl like that says,” announced Mr Trump. “So from tomorrow we’re shutting down all the oil refineries and covering the country in wind farms. See how she likes that.”