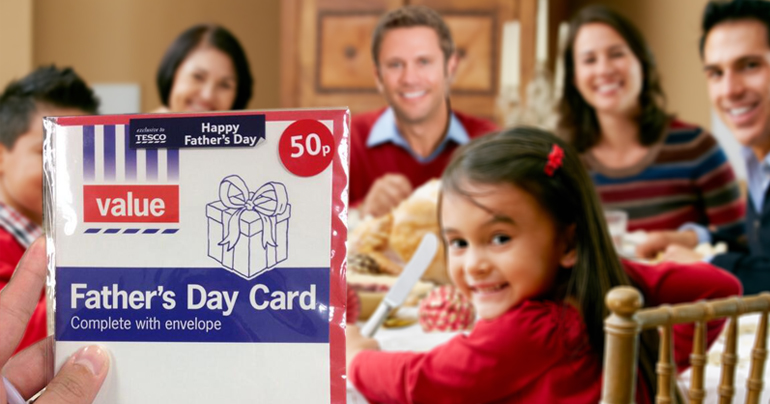 Local fathers were united in their praise of their offspring today, after children across the country turned up at the family home this morning with a piece of cardboard inside an envelope.

“I felt like I was announcing the Oscars” revealed 57 year old father of four, Martin Bosch. “I tried to make a speech after I opened it but the wains had already left to go home.”

This was a sentiment shared by fellow selfless sperm donator Danny DeWalt. “Aye when I see bits of cardboard lined up on the mantlepiece for me like that it brings a tear to my eye. All those decades of helping with their homework, driving them everywhere and paying for their food and clothes have finally paid off.” he said tearily. “One of them even put a £20 note inside, which I really appreciated. It saved me running to the bank machine when he tapped me for a lend later!”

Other more tech savvy children have taken their Father’s Day goodwill a step further by posting appreciation for their Dads on Facebook despite the fact he most don’t have an account.

“Would just like to show my appreciation for the best Dad anyone could ever ask for!” wrote Matthew Pinterest this morning. “You’ve always been there for me and I just wanted to take this opportunity to let everyone else know how much you mean to me, by publicly posting this old embarrassing photo of you that I found upstairs in a biscuit tin, without your permission. Thanks for everything. Love you Dad”.

The heartfelt message, which received dozens of likes and a myriad of hilarious comments about his father’s ’70’s lego hair’ was a real hit on the 28 year old’s timeline today – however his Dad seemed to know feck all about it.

“Naw, he never even mentioned it” he revealed “but he did give me a signed bit of cardboard and promised we’d go for a pint soon!  Just like last year.”