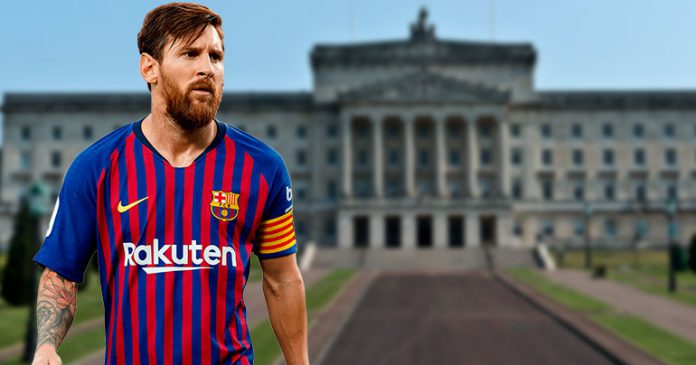 DUP manager Arlene Foster is said to be putting together a bid which would see the Argentinian move straight into her team at Stormont, and his outrageous wage demands are unlikely to cause her much concern.

“Messi would bring an entirely new dimension to the DUP attack,” says BBC sports guru Noel Swaggart. “In the past they’ve relied on tough right whingers like Campbell and Wilson, Foster will be hoping that Messi can bring more guile to her forward line.”

“His 100 million Euro wages aren’t a stumbling block, they’ll just offer him a job as a Special Adviser. They get paid much the same, with expenses on top.”

However Sinn Fein may swoop to scupper the DUP plans, says Swaggart.

“The Shinners have been looking for a big name signing for some time, ever since Steven Gerrard went to Rangers. Again, wages won’t be an issue, particularly if Messi will work cash in hand.”

“Martina’s a very offensive player who has scored almost as many own goals as Messi has at the right end,” Swaggart told us. “With her knowledge of the European game, Barca might just be interested.”

We contacted Messi’s agent to see if any of this was true and he poured scorn on the rumours.

“There’s no chance of Lionel signing for either of these two clubs, he’s been a TUV supporter since his childhood.”

TUV leader Jim Allister is currently trying to work out which foot Messi kicks with.