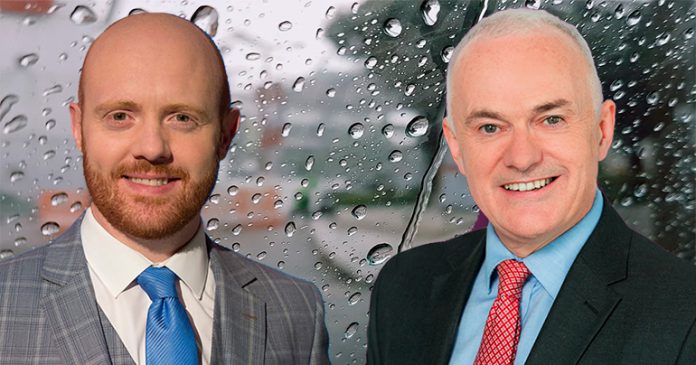 Northern Ireland’s top meteorologists Barra Best and Frank Mitchell are at loggerheads after BBC man Best revealed audacious plans to do away with Spring, Summer and Winter, amid growing evidence that our weather always feels a bit like Autumn.

“For decades now we’ve been seeing our seasons gradually morphing into one,” says Professor Best.

“It has become apparent that describing a brief warm period in June as ‘summer’, is pointless. It’s usually followed by two months of pissing rain, with a brief respite over the Twelfth if God is feeling Protestant.”

“Then the rest of the year consists of wind and rain, rain and wind, blustery showers and the occasional spell of gusty dampness interspersed with damp gustyness. Basically, we live in Perma-Autumn.”

His UTV counterpart Frank Mitchell reacted furiously to the pronouncement.

“Best is talking out of his arse,” argued Dr Mitchell. “It is apparent to even the amateur meteorologist that we can expect at least three frosty mornings in December, with a dusting of snow over high ground in January.”

“To compare that to the couple of warm days we get in August is ridiculous, unless you live in Katesbridge, where you should plan for 6 foot of snow at any time of the year.”

Professor Best had hoped to take his plans to merge the Northern Irish Seasons into Autumn before a debate of Royal Society of Meteorologists in September, but sadly the meeting has been cancelled due to the Covid-19 restrictions.

Instead, the argument will be settled in a bare knuckle boxing contest between the two weathermen on the lawns of Belfast City Hall next Tuesday.

Paddy Power are offering odds of 2-1 on Best, Evens on Mitchell, and 1-5 on rain stopped play.