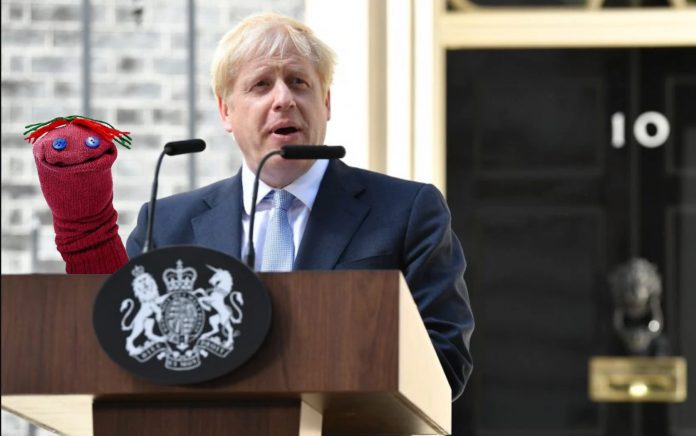 Boris Johnson has surprised political observers by sacking Northern Ireland Secretary Julian Smith and replacing him with a handmade puppet.

Mr Smith’s sacking has raised eyebrows in the Province as he appeared to have accidentally done quite a good job in restoring devolution here, a prize which had eluded several of his predecessors.

Despite this success, the Prime Minister has apparently replaced him with a sock puppet called Mr Brandyloos, who is believed to be the Marionette of Parliament for Great Yourma.

A Downing Street insider has denied rumours that Mr Smith was sacked due to his concerns about the impact of Brexit on Northern Ireland, or that the Prime Minister wanted a replacement who would toe the party line.

“Look, it’s clearly got nothing to do with that,” he told us. “Julian Smith may well have broken three years of political stalemate in your little shithole, but otherwise he was a complete failure.”

“The Prime Minister needs a safe pair of hands in Belfast, someone who can work well under pressure, and work well with someone’s hand up his arse.”

It is believed that Mr Brandyloos will make his first statement to the press as soon as Dominic Cummings allows his lips to move.