Stormont to be filled with children’s TV characters after election? 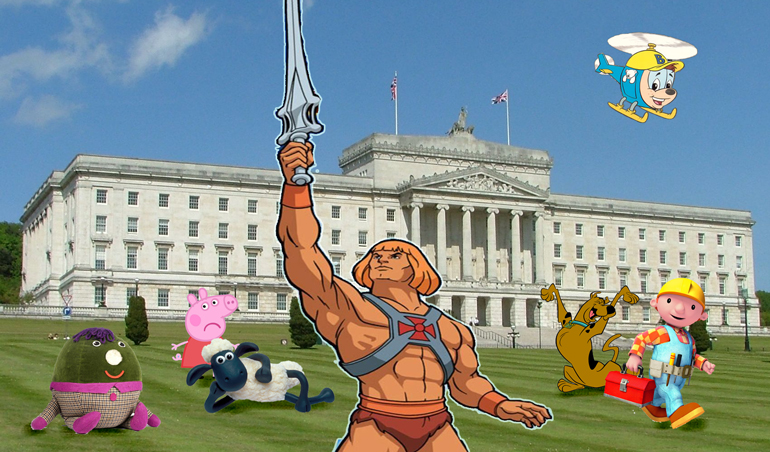 Following the news that the DUP approached former Blue Peter presenter Zoe Salmon to see if she’d run in the Assembly elections, it has emerged that other local parties are nominating popular children’s TV characters for the forthcoming poll.

First to announce a new candidate were Sinn Fein, who revealed that they’d be putting forward irritating pre-school favourite Shaun the Sheep in North Belfast. “Séan na Caorach has long held an interest in Republican politics,” said his party colleague Gerry Kelly. “He knows what it’s like to be fleeced by the establishment and won’t let the wool be pulled over his eyes,” he continued, before concluding “Up the Ba.”

Meanwhile in Upper Bann the UUP leadership have persuaded He-Man from Masters of the Universe to stand. “He’s a very strong candidate who has consistently shown his loyalty to the crown, albeit to the crown of Eternia,” claims Mike Nesbitt. The Ulster Fry understands that Mr Man is already on the campaign trail, with several reports of him touring round Tandragee on the back of Battle Cat, distributing leaflets to bemused farmers.

The SDLP struggled to find a candidate willing to stand in East Antrim, but finally persuaded the ageing Big Ted from Playschool to put his name forward. This will bring divided loyalties for many fans after it emerged that Humpty from the show is to stand for the TUV in the same constituency.

No such problems for the Alliance, who will field Budgie the Helicopter in North Down and SpongeBob SquarePants in South Belfast. “And it’s not just because they wear yellow,” said party leader David Ford, as he shook hands with West Tyrone candidate Homer Simpson.

However as yet no party has manage to sign up the ever popular Teletubbies.”They’re big eared incoherent idiots who live in a fantasy land and take their instructions from a floating ball in the sky,” said a Stormont insider.

“They’d be ideal for the DUP, if they didn’t already have Edwin Poots.”