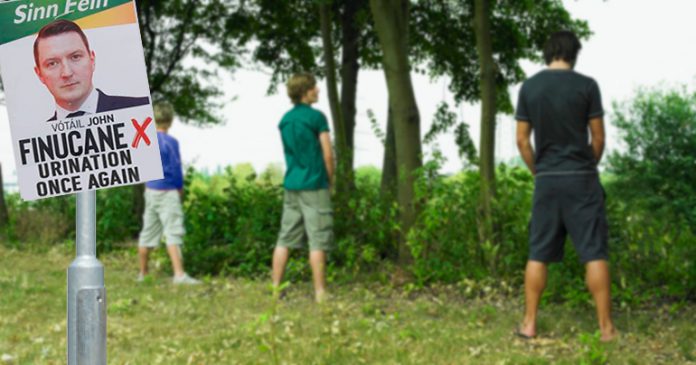 Amid growing shock and outrage over what has been dubbed “Pissgate” – the admission by Sinn Fein candidate John Finucane that he was caught having a slash in the street – local politicians have rallied round to confirm that they, too, regularly take the piss in public.

“I’ve built a career creating steaming puddles of verbal urine,” he told us, as he stepped out from behind a phone box on the Woodvale Road. “Sure it’s only a couple of months since I was saying how secure the Union was under Boris Johnson, now listen to me!”

“I’m just after telling everyone how great we’ll be at resisting Brexit, sitting in our constituency offices dealing with people’s complaints about bins,” she admitted. “Half of those complaints are about politicians pissing behind them on their way home from ‘social events’ as well!”

Members of the voting public are equally unimpressed by the revelation.

“Isn’t that what all our elections are about here?” asked 48-year-old Pauline Booth. “They mark out their territory like dogs in the street, then piss our money up against the wall as they rake in the expenses.”