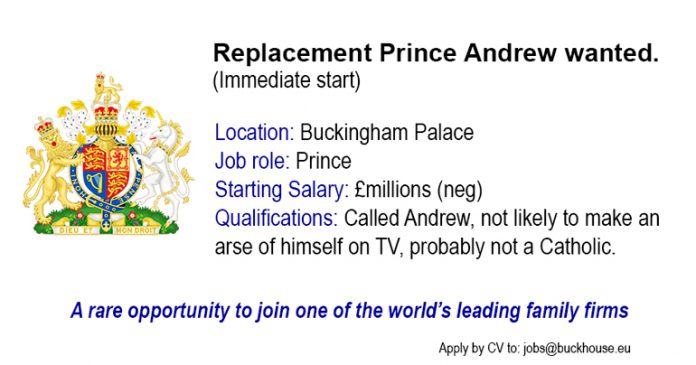 Prince Andrew sensationally faces the sack from his role in the Royal Family following his car crash interview on Newsnight, The Ulster Fry has learned.

Our source in Buckingham Palace tells us that the Queen and Prince Phillip are set to advertise for a new Prince.

“They’ve drawn up some very strict criteria,” said our insider. “Ideally they’d be British, called Andrew and aged somewhere between 30 and 60. They have to be able to walk and talk at the same time and look reasonable in a uniform.”

“Aside from that they just have to show that they don’t hang around with paedophiles and promise not to make half-assed excuses on TV interviews if they do.”

A shortlist of potential signings has been drawn up, as the Royals approach some of the world’s top Andrews to see if they’d be interested in the job.

“They’ve already been in touch with Andrew Ridgeley out of Wham, Handy Andy off Changing Rooms and Andrew Lloyd-Webber,” says our man, “but that shouldn’t put the ordinary Andrew in the street off from applying, particularly if they’ve been to a Pizza Express recently and don’t sweat much.”

“Realistically, he just has to be less useless than the current job holder.”

Advertisements for the post will soon be appearing in many of the UK’s top newspapers, including The Times, The Daily Telegraph and The Mourne Observer.

Applicants are advised to get their CVs in early, before this latest scandal is covered up and we’re all meant to forget about it because some other royal has a baby.