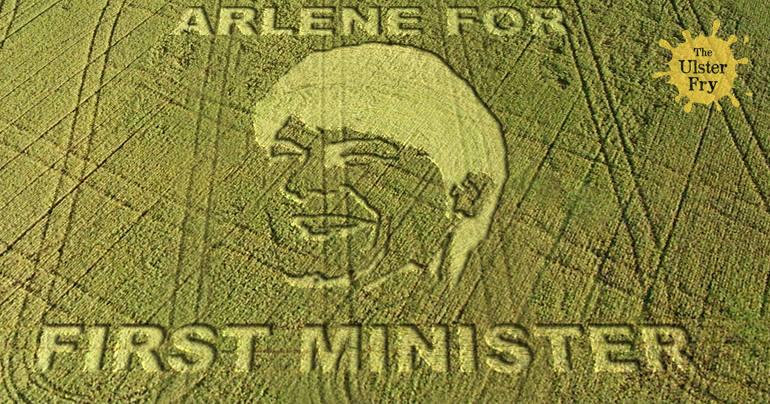 DUP leader Arlene Foster’s campaign to hold on to the First Minister position has received a surprising boost today, the apparent endorsement of aliens from outer space.

The news came to light after several mysterious crop circles appeared in fields across Northern Ireland – each one calling on people here to support Foster.

According to experts at Armagh Planetarium the developments shouldn’t really come as a shock. “We know that aliens are watching our planet from afar,” says Professor Brian Cocks, “and they couldn’t have missed Arlene going on and on and on about how she has to be First Minister or the planet will implode. Chances are they just feel sorry for us.”

DUP representatives have been accused of using every available opportunity to hammer home the “Arlene for First Minister” line, a claim denied by North Antrim candidate Simone Hamilton.

“We’re standing on our record in Stormont, we’ll be elected on policies, not personalities,” she told us. “This type of blatant anti-unionist propaganda is just what we can expect if Arlene isn’t returned as First Minister.”

Using a very elaborate phone we were able to contact the aliens themselves who confirmed their backing for the DUP, despite the party’s less than favourable immigration policy. “The People of Gharlius are very impressed with your Edwin Poots,” said Imperial Star Commander Zrogrig Blatt, “he’s something of a pin-up on our home planet.”

The news will come as a blow to Sinn Fein, who have also been hoping to woo the extra-terrestrial vote. “Ourselves are not alone,” tweeted party president Gerry Adams, in a belated attempt to win back the little green men, “Ballymurphy Martian.”