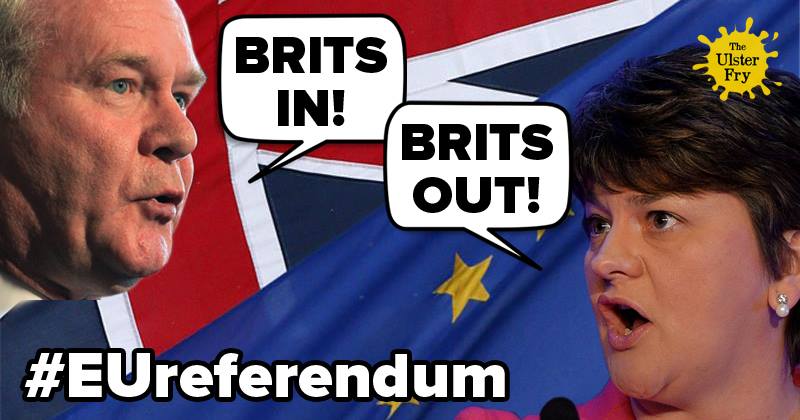 It hasn’t been mentioned much on the news, but there’s a referendum on the UK’s membership of the EU soon.

This is one of the most confusing votes we’ve ever had in Northern Ireland – Sinn Fein are saying “Brits in” and the DUP saying “Brits Out” – so we thought it’d be useful for us to look at the big issues to see if we could help you decide.

LEAVE: the EU costs a lot, and supposedly the UK puts in £50 million a day more than it gets back out. Basically this makes it sound like the UK is really, really shit at the poker machine in the pub. Leave say they’d spend all that money on the NHS but they include Iain Duncan Smith, who’d evict his granny if she had a spare bedroom.

REMAIN: Northern Ireland gets more out than it puts in – we usually end the year about £60 million up – probably because we spend more time in pubs playing poker machines.

REMAIN: farmers do quite well from the EU because they get money under the CAP – the Culchie Allowance Policy – which is paid for not having cows. This money would stop.

LEAVE: say they’d keep paying the Culchie Allowance to the farmers, presumably with money they haven’t given the NHS.

REMAIN: The EU guarantees workers across the continent the same rights to things like Maternity pay, discrimination and health & safety.

LEAVE: “All of these rights would be retained,” say well known workers’ rights activists Nigel Farage and Iain Duncan Smith, who keep going on like they’ll run the country if they win.

REMAIN:  say if we left we wouldn’t be allowed to go on holidays in Europe any more and there’d be a border checkpoint at Muff.

LEAVE: travel will stay the same even though everyone in Europe will be quite pissed off with us. To be fair it probably won’t affect us much here as we have Portrush and Bangor and don’t need foreign holidays.

REMAIN: the EU is our second biggest market after Nutts Corner. Leaving a free trade zone of that size would be economic suicide.

LEAVE: the UK doesn’t make anything any more so who gives a f**k? We’d just import things from China and sell them to each other with a good mark up.

6. Sovereignty and the Peace Process

LEAVE: according to the Leave camp we have to do everything Europe tells us. The Peace Process would do even better as cross border smuggling would be more profitable providing a boost to the South Armagh economy.

REMAIN: Remainers say we don’t have to do everything the EU says as the UK has a veto. If we left the Peace Process would collapse and we’d all have to start fighting each other in the street.

LEAVE: the two biggest Leave figures – Nigel Farage, the leader of UKIP whose ancestors fled religious persecution in France, and Boris Johnson, the Tory MP whose ancestors escaped extremism in Turkey – are very opposed to immigration because they say it threatens jobs.

REMAIN: the Remain campaigners say we’ll need more immigrants to pay the pensions of people here in the future, including all the pensioners who’ve emigrated to Spain.

LEAVE: according to the Leavers we’re heading towards a European army and the UK couldn’t do things independently.

REMAIN: the Remainers say this is nonsense, we can still do what the Americans tell us whether we’re in the EU or not.

LEAVE: Don’t worry, we can trust a Tory government to do right by the common man. It’ll be grand!