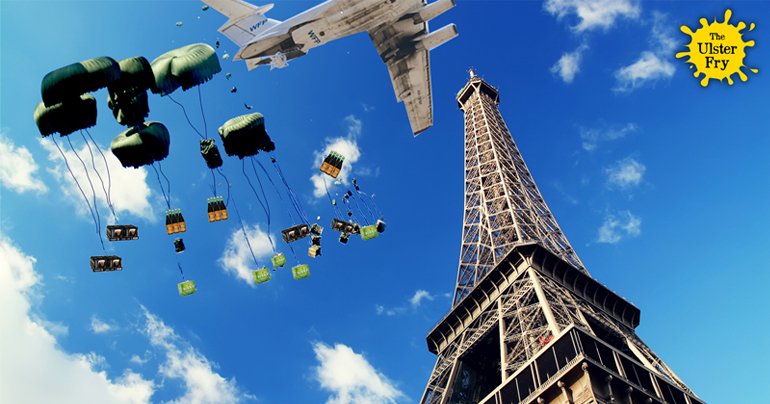 The UN has stepped in to avert ‘a potential humanitarian crisis’, by bringing much needed supplies to fans of Northern Ireland and the Republic stranded in France.

Now two weeks in, it is understood that many fans are running low on basic necessities, including underwear, Veda bread, flags and Buckfast.

One stranded member of the Green and White Army told us that the crisis was of a biblical scale. “There’s thousands of us wandering the streets unable to communicate with the locals outside of ‘quatre bières s’il vous plait’ and ‘Will Grigg est en feu’,” explained Antrim man Gary Armstrong. “I ran out of pants on Monday but I’ve met one lad from Larne who’s been wearing the same pair for a week, though he says that’s what pretty normal for Larne.”

Lurgan man Shea Houghton told us Republic fans were in similar difficulties. “We used our last pair of clean underbags on Monday to clean the windscreens of passing French cars whilst pissed for a YouTube video. We’ve been going commando ever since.  If French people thought there was ‘some craic’ at the Italy match, wait til they see us on Sunday!”

Food too is an issue. “We haven’t eaten properly in days,” said NI Fan, Beef Gillespie. “There’s only so much pain you can take, pain au chocolat, Pain Brioché, petit pain… We need proper food – crisp sandwiches and sausage sodas.”

Such dire stories have forced the UN to take action, with a huge aid convoy currently en route from Rosslare. Planes have also been dropping pastie baps and cases of Harp by parachute. However a mixup with flag-drop parcels could see Northern Ireland cheered against on Wales with Tricolours, whilst the Republic may face France against a sea of Ulster flegs.

Though rather than incite violence, French police were cheered to learn that Irish fans were so sound, they had simply organised a “Flegs for Clean Begs” exchange programme.

“I know why they are called the Euros now” added skint fan Randy Townsend. “Cos ye need a whole f**king rake of them. Ma, if your reading this, send us a sub!”