The Northern Ireland Scale of Intoxication 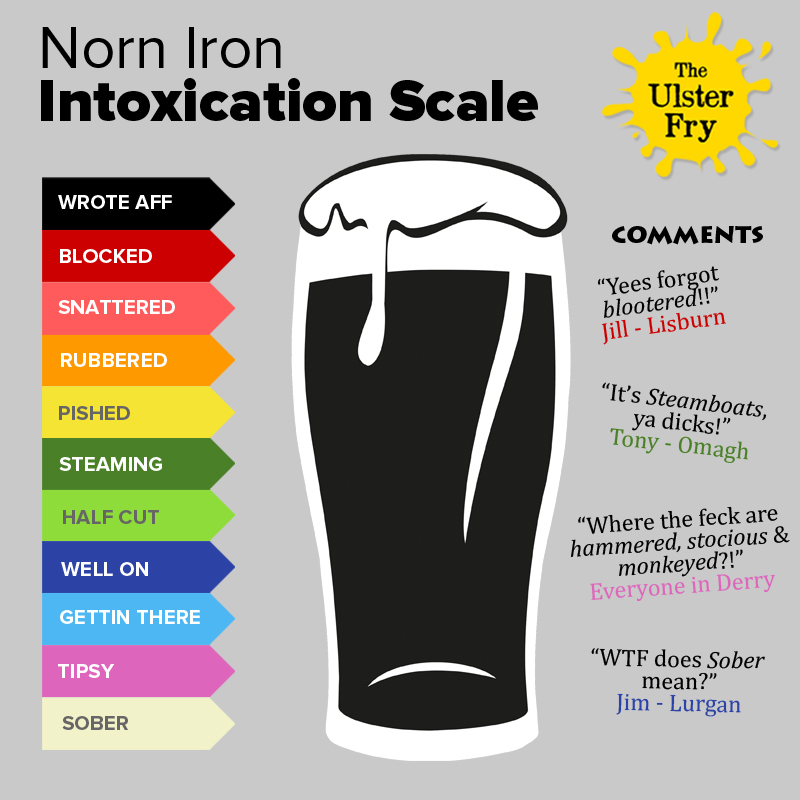 There is growing anger amongst drunk people this evening after controversial/stupid website The Ulster Fry published the latest in its guides to “Norn Iron spake” – this time a scale of drunkenness.

“Half the words are missing,” was the slurred response of many pub goers this evening, “Hammered and blootered aren’t there, and where’s comatose, ballixed, wrecked and lamped?”

“Thesuns must be wile posh,” was the reaction of Sherbet Dibdab, a 33 year old office worker we found under a table in Belfast’s Washington Bar. “Everyone knows it’s ‘Writ Aff’ not ‘Wrote Aff’. Who do they think they are – the Queen? I’ll bet they say ‘one is wrote aff, so one is’.”

Professor Francis Spangles, Head of Big Words at the University of Newtownabbey’s Linguistics Department, was more interested in the other end of the scale. “It is fascinating to note that Northern Irish people have a such a wide variety of words and phrases denoting stages of drunkenness, but there isn’t much to replace the word ‘sober.’ This must tell us something about something.”

At a packed news conference a spokesman for the Ulster Fry told reporters “Youse are my best friends, so ye are. Swear to f**k, I love yousuns, so I do. Now let’s get snattered.”