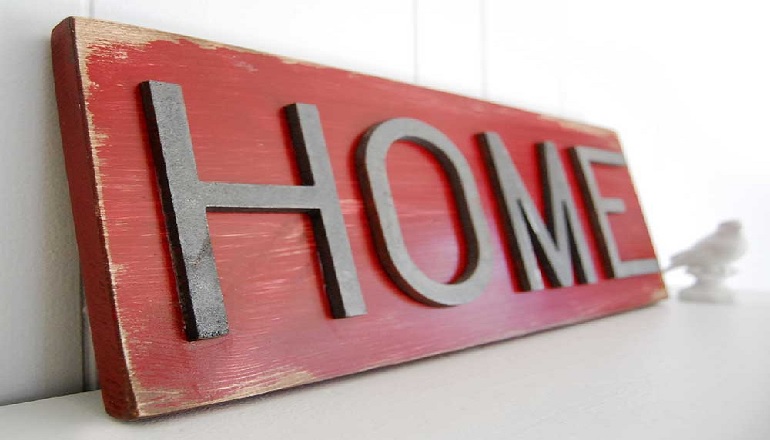 A Co. Armagh woman has been jailed for two years after her addiction to covering her house in crap decorative signs spilled over into violence.

34 year old Arlene Thomson, who cannot be named for legal reasons, first developed her addiction to the these items after receiving an hilarious bathroom sign which declared “If you sprinkle when you tinkle, please be sweet and wipe the seat.”

“Pretty soon she was hanging these things all over the house,” says her husband Barry, “we had signs in the kitchen saying “I love cooking with wine, sometimes I even put it in the food’ and ‘Mum’s café.” Everything had labels on it. In the bathroom she had carved wooden letters saying stuff like, ‘Bath’, ‘Shower’ and ‘Towels’, as if we’re all too stupid to know what the things are. Why do I need a sign that says ‘Home’ on it? I know when I’m home.”

“The worst ones were the lifestyle ones,” claims Barry, “She had loads of plaques and pictures saying stuff like ‘Love is at the heart of this home’, ‘Life is Beautiful’ and ‘Sun, Sand, Ocean’. We live in Craigavon FFS.”

According to her solicitor, Mrs Thomson’s addiction worsened after the ‘Keep calm and carry on’ craze. “Arlene became completely incapable of remaining calm unless she had a sign which instructed her to do so,” says Albert Check, of Lurgan solicitors firm Cash, Orr, Check.

“For example, she was OK when making tea if she’d read ‘Keep calm and put the kettle on’ but flew into a rage when doing her grocery shopping because she hadn’t seen ‘Keep calm and go down to the butchers for half a pound of sausages.’ As a result Mrs Thomson assaulted four shopkeepers over a three week period.”

Passing sentence, District Judge Edward Dread said it was one of the worst cases of sign addiction he’d ever seen. “In many ways I feel sorry for the defendant, there are unscrupulous people out there dealing in these items and profiting from other people’s misery.”

No one from TK Maxx was available for comment.