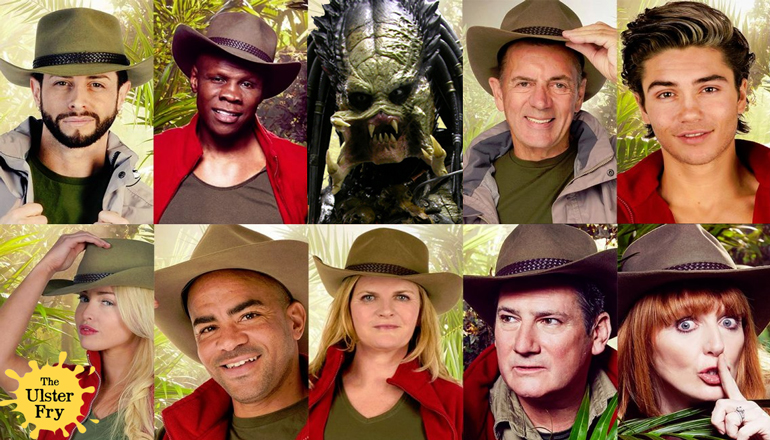 The ratings of I’m a Celebrity Get Me Out Here are set to soar this week after ITV announced jungle-loving alien hunter The Predator as a new contestant on the show.

“Watching people eat dingo dingleberries, racoon ringpieces and tarantula testicles was great craic for a while” explained ITV chief, Dick Whacker. “but folk are sick to the back teeth with it now, so we’re adding extra survival incentive by having an invisible psychopathic alien picking off contestants with a laser canon.”

Ant and Dec broke the news this morning, revealing that the Predator was taking the place of Lady Colin Campbell. Rather than the expected outbreak of panic, most contestants were delighted to get a better looking replacement for the apparently famous socialite, whilst others admitted that an actual celebrity entering the show was ‘wile exciting’.

However today’s team challenge has not gone well after the Predator suggested that rather than compete for rations the red team should simply eat the yellow team, kindly offering to rip out their spines and hang their carcasses from the trees.

Several technical problems have also arisen, which are preventing Arnie’s former nemesis from sighting his targets. “Aye, I can’t see yer doll Susannah from thon clothes show cos she’s a cold blooded bitch,” explained Mr Predator. “Whilst some of the boring bastards are fading into the background that much they are pure camouflaged. The crafty hoors!”

The move is just the first in a raft of sci-fi stars set to appear on reality shows. Alan Sugar has revealed that the Alien is set to compete to be his Apprentice, whilst an upcoming episode of ‘Catfish’ shows Robocop trying to bag a date with the Terminator by letting on to be Sarah Connor.

Meanwhile the BBC are in talks with Hannibal Lecter about a role in Celebrity Masterchef. Viewers are said to excited by his suggestion to cook the presenters in the live final.