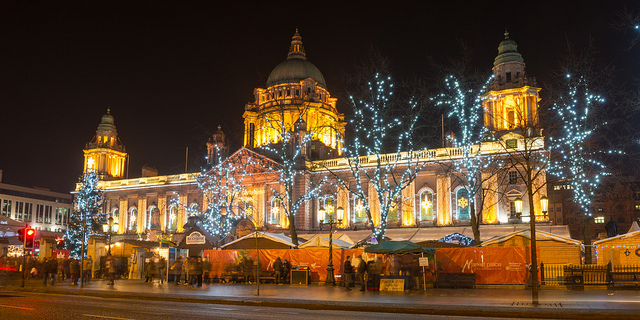 Local trendsetters were delighted today as the same Christmas Market that came to Belfast last year returned to the city this year, in precisely the same configuration.

The news was welcomed by socialites across the Province, who can now take a break from their normal routine to make their annual customary trip to City Hall to drink German craft beer and eat bratwurst sausages, again.

“Ye canny beat it!” revealed an animated Pancake O’Hanlon, as he excitedly queued for an hour to get a pint. “I love it here. Just smell that Christmas cheer!’ he exclaimed, as the festive aroma of kangaroo burgers, German hotdogs, French crepes and Spanish Paella filled the air. “Sure where else would you get it?”

“We’re going to the one in Derry next week too!!’ he added.

These sentiments were echoed by fellow socialite, Dipstick McBrearty, as he soaked up the seasonal ambience in the 200 metre queue to get in. “Aye, I’m sick of going to all the same places in Belfast. Sure most of the bars in the Cathedral Quarter are that busy now ye have to take your drink outside for gawd’s sake!”

“That’s why I love coming here every year, for a wee change. Nothing beats a pint with your mates out in the fresh air!”

Local market stall traders were unavailable for comment at City Hall, as they were all up in St George’s Market taking their oil. However some Spanish and German fellas we spoke told us they were ‘pure raking it in’ and that they were looking forward to taking all our cash home to spend elsewhere in the EU.

It was later reported that the entire circulation of Northern Bank’s infamous ‘plastic fivers’ now belong to a Belgian waffle maker who still can’t find a bank to take him seriously.