Fury as Charles and Camilla give Northern Ireland a bad review 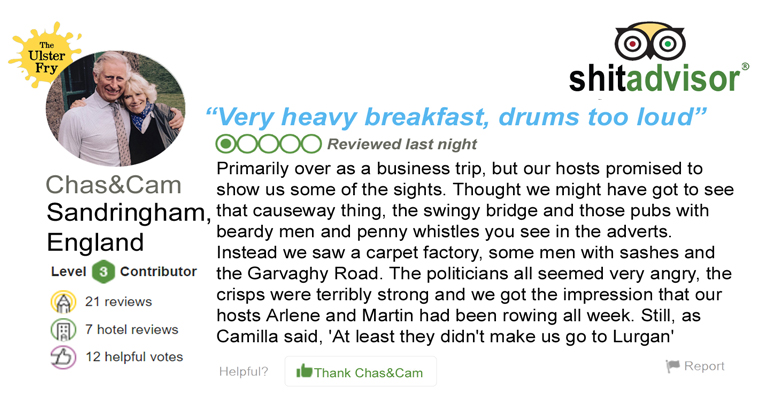 There was anger and dismay in tourism circles this morning after it emerged that Prince Charles had given Northern Ireland a 1 star review on the popular travel site Shitadvisor.

Mr Wales has been here for a couple of days now, with his wife Camilla arriving yesterday, and it had been thought that the pair had been enjoying their mini-break. However it turns out that neither of them had been impressed with an itinerary that included several factories, an Orange Order museum and a walkabout in Portadown.

The review has had the unusual result of uniting the province’s feuding politicians. First Minister Arlene Foster was furious, complaining about “that posh ballbag coming over here and sleggin, it’s like he thinks he owns the place.”

Meanwhile stalwart Republican Martin McGuinness has also leapt to Northern Ireland’s defence. “How dare he have a go at Our Wee Country?” he tweeted, “#OrangeOrder museum is pure class, I’ve been 9 times and I’m still not bored with looking at sashes.”

The offending review was swiftly deleted, but not before Royal Aides were forced into a gushing apology. “Charles loves the place, honest,” said Chief Footman Windsor Castle. “He’d had a few jars last night and was rubbered. He’s always posting shite when he’s pished, but usually under the alias Katie Hopkins, though to be fair – Portadown? What were yis thinking sending them there?”

The Royal couple head on to Donegal today, leading the Prince to tweet “nice landscape, shame about the Mexicans” early this morning.