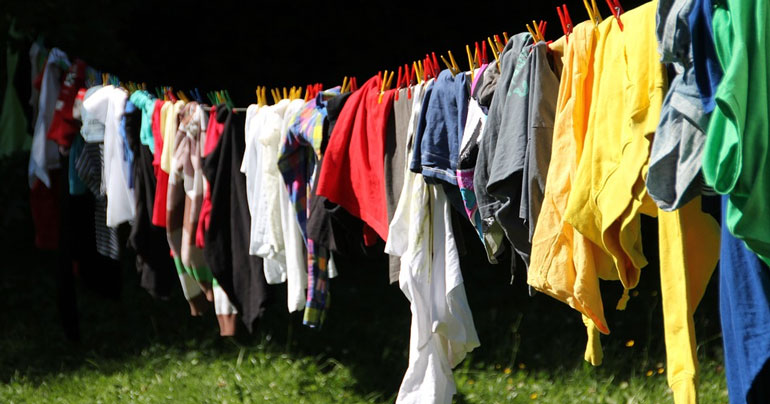 Local mums lost the run of themselves today as news emerged that it was perfect weather for drying stuff.

“I was so lured after I seen the weather forecast this morning!” Tyrone mammy Sian Mills told us. “I’d three loads of washing done by lunchtime, but it dried that quick I put them all on for a second cycle there, just to make sure.”

Her neighbour Donna Manna agreed. “I changed the wean into a brand new outfit this morning and ten minutes later he still hadn’t spilled a single bit of Ready Brek over himself! I was pure ragin’, so had to scare the shite out of him when he drinking his chocolate milk to get enough clothes together for a second load”

Many other households have embraced the perfect drying conditions so readily that they’ve taken to washing unusual items.

“After I boiled washed the bathmats, curtains and mantelpiece I noticed our dog had left big dirty paw prints all over the hall carpet,” revealed Kilkeel woman Anna Long. “So I threw him in for a wee spin cycle too.  He doesn’t like being put outside though the wee critter, so he’s hanging over the banister upstairs instead.”

Belfast mother Mavis Flats told a different story. “I’m sick of not running around picking up clothes the weans have left at their arse today,” she moaned. “I got that frustrated I threw the kids into the machine themselves after lunch, just to freshen them up.  They smell great now, but it seems they shrank a wee bit.”

“At first I was scunnered, but then I minded that it’d give me a chance to wash all their baby clothes again. Everyone’s a winner!”