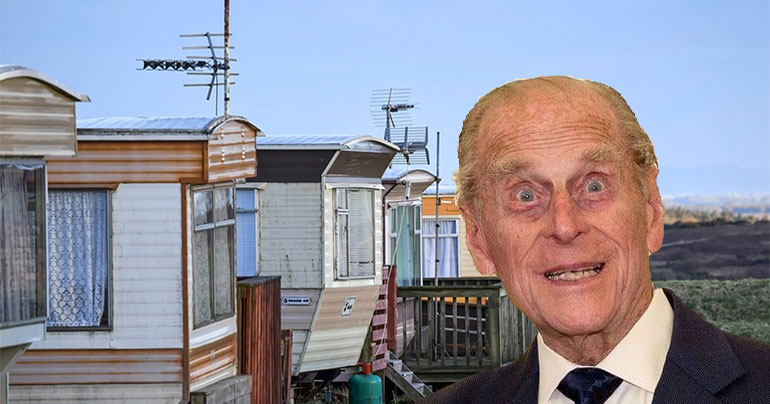 Prince Philip has decided to jack in travelling around the world with the Queen so that he can get more value out of his static caravan on the Ards Peninsula, The Ulster Fry can exclusively reveal.

“Me and Liz bought it a few years ago,” Mr Philip told us. “We got it second hand on Gumtree from a fella in Lisburn – it was a real bargain, 7 grand but he threw in the TV and a couple of gas cylinders so we wouldn’t be starting from scratch.”

“It’s 35 foot like,” he continued. “Sleeps 4 with room for the corgis, so the boy can come over with that new wife of his, though if any of the rest of the weans land in they have to put up a tent. Now I’ve quit work we can come any time we like, just wing a few bags into the back of the Megane and we’re off!”

Since buying the mobile home the royal couple have spent many happy weekends in Sandyballs Caravan Park, where they’ve become firm friends with their neighbours.

“Sure they’re quare craic,” said fellow camper Moira Station, from outside Moira. “Phil’s always up for a BBQ with a rake of beers, though herself is a bit of a wine connoisseur. Only the finest stuff mind, she has a footman pick out all the best numbers on the Bucky bottles.”

Park owner Kirk Cubbin told us that his regal guests have added a bit of glamour to his site, leading to many other members of the nobility renting plots.

“See that one over there? That’s the Duke of Devonshire’s, and the one beside it belongs to the Marquis of Salisbury. His cost near £12k, but it’s got an awning and everything.”

However the new found royal seal of approval is not without its pitfalls.

“Aye, they owe me £6 grand in pitch fees, the tight hurs. He keeps saying she’ll pay, and she never carries any money.”