Tiger Woods “on the rip” since McIllroy’s stag do, say pals 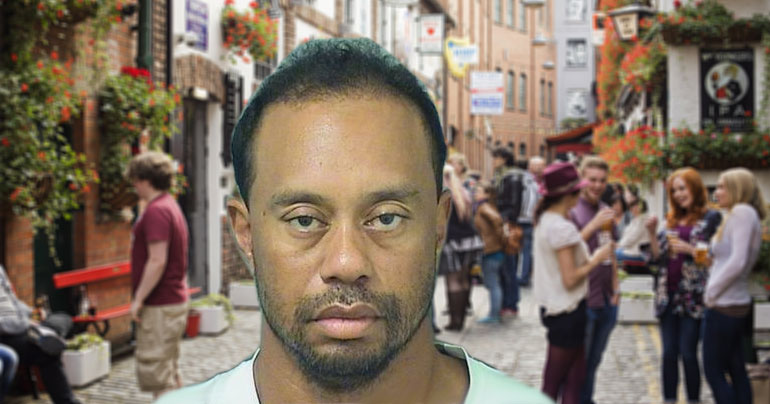 Following his arrest yesterday, during which it appears US police dragged him backwards through a hedge, sources close to golfer Tiger Woods claim he’s been ‘on the lash’ since Rory McIllroy’s stag do in Magaluf.

“He’d literally just landed home!” revealed close pal, Wilson Staff. “We told tour organisers he had a dodgy back to cover for him, but the truth is he fell in with a lock of boys from Glengormley on Rory’s stag and went on a buck mad bender! No one has seen him since!”

“We eventually tracked him down by tracing his bank transactions,” he continued “which fluctuated between a Curley’s Off-Licence, McDonalds at the the Abbey Centre and a dodgy cash-machine at the top of the Antrim Road.”

However Tiger’s new best pal, Mackers Callaway from Rathcoole estate, reassured us that Woods is as committed as ever to his sport.

“He’s been flat out practicing! He hit at least a dozen new clubs in Magaluf and scored a load of birdies every time we went to a strip joint!”

“In fact he must approaching his best form, cos I overheard him a few times saying he fancied smacking the hole on one”

A spokesman for Mr Woods told us he’d be back in Northern Ireland soon, where he hoped to take up a new role in the sport. “He’s quite fancies a job at the Pirate Golf in Dundonald.” said Alba T Ross.

“Apparently it was the ‘yo ho ho and the bottle of rum’ that swung it!”