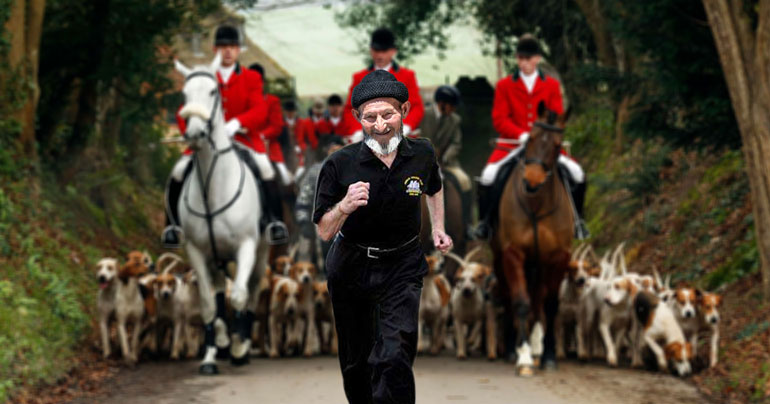 A mix up at Conservative Party Headquarters may have inadvertently stumbled upon a solution to the long term care of the elderly, a right wing think tank has claimed.

The error happened after two pages of the manifesto got stuck together, meaning that a promise to “allow posh folk in red coats to pursue vermin across the countryside” was immediately followed by a claim that “this will eliminate pensioner poverty by 2026”.

“At first we thought it was a mistake, no Tory would really want to eliminate pensioner poverty ,” says Finlay Finlayson from the Institute for Faecal Studies. “But if you think about it – it makes perfect sense!”

“Pensioners are always banging on about how cold they are, and a good sprint across open farmland while being mauled by hounds is bound to warm them up. They’d get a lot fitter in the process, getting rid of the need for all that extravagant wastage on care homes.”

The Daily Mail has also lent its support to the proposal, with the headline “Survival of the Fittest” on the front page its early editions this morning.

“Hardworking pensioners who’ve saved all their lives needn’t be afraid of this idea,” claimed their editorial, “they’ll be able to afford horses to join in the fun! It’s just those scrawny poor ones that’ll be affected, and you don’t know any of them, do you?”

However Theresa May appears to have made a U-turn on the policy, telling a news conference packed with supportive journalists that there would be “an upper limit” on the age of the pensioners being hunted.

“There’s no sport in chasing 95-year-olds across a ploughed field,” she explained, “They tire too easily, at least that’s what I’ve found anyway. We can just beat the older ones with sticks, which they’ll have to pay for of course.”

Labour leader Jeremy Corbyn also issued a statement about the issue which no one read because he’s an evil communist who wants to eat your children.