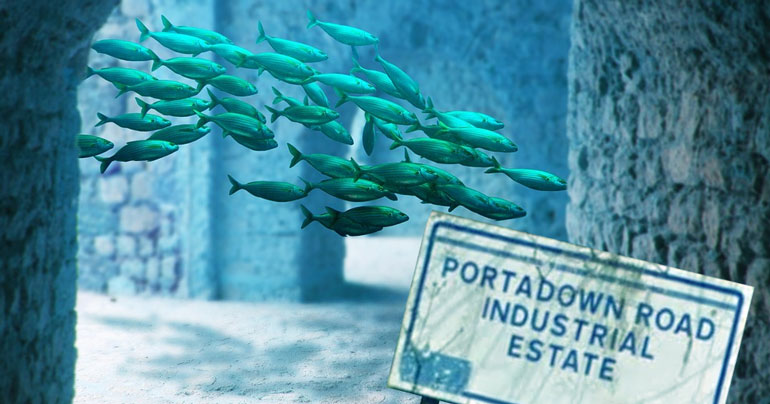 An Armagh archaeologist has stunned experts by claiming to have found a lost civilisation close to the shoreline of Lough Neagh.

Lorcan Spade, Professor of Old Things at the University of Tandragee, told us that the recent spell of hot weather had left the lough “like a dry sheugh,” allowing him access to a previously unexplored landscape.

“I began round Derrymacash, moving eastwards in search of prehistoric life,” he explained. “At first there wasn’t much to see but as I climbed the ancient Kinnego Embankment, I found what can only be described as one of the most significant circular monuments ever seen on this island.”

At first he was baffled, but fortunately Professor Spade was able to decipher some symbols carved on a metal plate close by. “This was the long lost Junction 10,” he told us, “a mystical roundabout structure which, legend has it, leads to the forgotten city of Lurgan.”

Continuing on his journey, Dr Spade soon found more evidence of human activity. “The people who lived here seem to have followed a religious leader called Friar Tuck, going so far as to erect a temple in his honour. This sacred place was littered with food offerings, its car-park daubed with rubber “donut shaped” markings.”

The intrepid professor continued on his journey into the city but was forced to flee after he was set upon by a tribe of cannibalistic natives whilst exploring a prehistoric branch of Wineflair.

“I barely escaped with my ballsack,” he told us.

As a result of the discovery, the UN has declared the entire Craigavon area a World Heritage Site.

“It’ll be just like the Grand Canyon,” said a spokesman, “A massive hole miles from civilisation.”