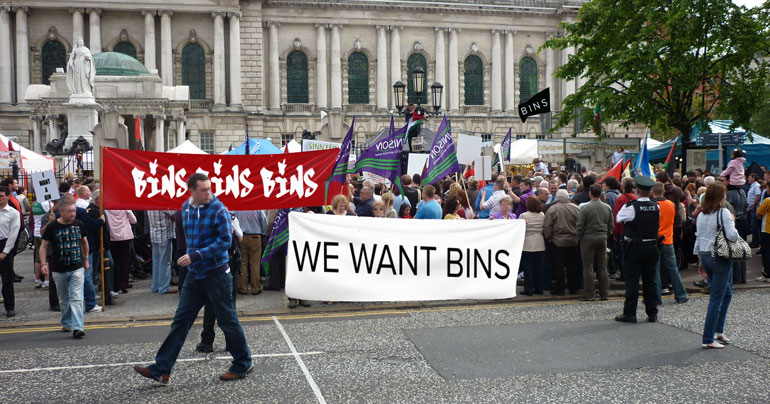 The people of Belfast have taken to the streets in protest at what has been described as an “unprecedented shortage” of bins.

It is understood that crowds began to gather around City Hall after council officials revealed that their new policy of banning food waste from black bins had led to a “surge in demand” for the wee brown ones that you’re supposed to keep in your kitchen.

The announcement led to widespread panic buying of bins across the city, with one branch of Dunnes forced to close after an angry mob stormed the household section.

“It was mayhem in there,” said shop assistant Latsu Nai. “I saw one woman assault another customer repeatedly with a spatula, a metal one as well. Then some man pushed over a display of cushions, blocking aisle three. It was awful to watch, people were falling on the cushions and everything.”

The violence spilled onto the city streets with furious residents gathering round council bins and attempting to rip them from the ground. The PSNI riot squad arrived soon after and successfully corralled the angry shoppers into the area around City Hall, where a protest camp has been established.

“I’m here for the long term,” said Ballysillan resident Billy Sallan. “I won’t have my children saying ‘What did you do during the great bin crisis’ when I’m older,” he continued, before leading his fellow protesters in a chant of “What do we want? Brown Recycling Caddies! When do we want them? As soon as possible!”

World leaders have appealed for calm, with US President Donald Trump and his Russian counterpart Vladimir Putin issuing a joint statement in which they called for “dialogue and clear heads at this difficult time.”

A spokesman for Belfast City Council told us that they had no idea what we were talking about.