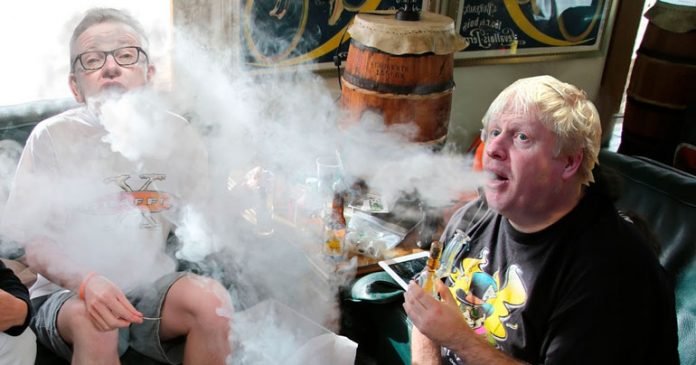 With several leadership contenders admitting that they’ve taken illegal substances, the Conservative Party has decided to bite the bullet and choose the next Prime Minister on their ability to take copious amounts of drugs.

The Ulster Fry understands that Boris Johnson and Michael Gove are currently holed up in bedsit in Camden, where they’ll smoke immense quantities of dope before undergoing a series of drug fuelled challenges to see who’s the biggest stoner.

“They have to show that they can still roll a joint one-handed after numerous hits on the Tory Party’s official bong,” explains Elis Dee, the MP for Little Snorting. “They’re both struggling a bit, but the local branch of the Conservative Women’s Association are keeping them supplied with munchies so we hope to have a result soon.”

“They’re appearing before the Party Committee in Ketamine-on-Sea,” says Dee. “We believe they’re both taking multiple doses of Calpol in an attempt to show that they’re real contenders.”

Senior Conservatives have denied that having a druggy past should be a barrier to becoming the next Prime Minister.

“We don’t really have much option,” says Party Vice-Chairman Ebeneezer Goode.”It seems most of the leading candidates were off their tits during the 80s and 90, and to be fair, you’d have to be off your tits on something to want this job.”