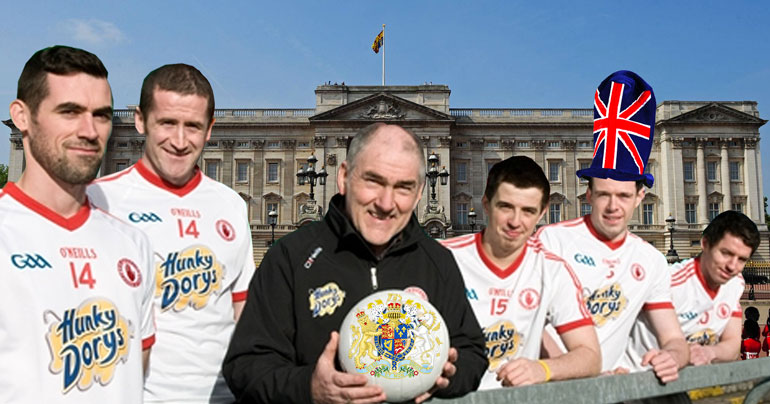 The world of sport and politics have sensationally combined after the Tyrone GAA manager Mickey Harte issued a statement of loyalty to the Queen on behalf of his county.

The news comes after Tyrone player Tiernan McCann was handed an 8 week suspension for dramatically falling over after having his hair stroked by Monaghan counterpart Darren Hughes.

Speaking to a packed press conference in Omagh Orange Hall, Mr Harte told reporters that Southern bias in GAA circles had left Tyrone fans with no other option. “Themuns in the Free State get away with everything,” he argued, “it is perfectly clear that no Northern Irish county or player can expect a fair hearing from the governing body at Croke Park.”

“Everyone knows that the hair and beard of a GAA player are vital to his performance,” he continued, “In messing with McCann’s hair the Monaghan lad crossed a line and it is he who should be punished. We are left with no choice but to abandon our loyalty to Republican ideals and to instead throw our lot in with the British monarchy.”

The news heralded some dramatic changes in Tyrone Gaelic Football circles. The home of the sport in Omagh, Healy Park, has been renamed the Queen Elizabeth II Stadium, and the UK national anthem will be played before each match. Even more surprisingly the Union flag will now be flown at all Tyrone GAA ground, “and not just on designated days,” says an angry Mickey Harte.

Elsewhere top club side Clann Na nGael have been renamed Clann Na nPrincess Charlotte, and an Orange Lodge has been formed amongst county players. Tyrone captain Sean Cavanagh told us he was delighted to have been installed as Worshipful Master of Omagh Rising Sons of Dooher, after converting to Free Presbyterianism.

In a move planned to cement the changes, the new look Tyrone side played a friendly against an England selection this afternoon. “A disappointing result, but I’m delighted with the performance,” said Harte, after he saw his team bowled out for 255 chasing a target of 315.