Earth to be bombarded by shower of bastards 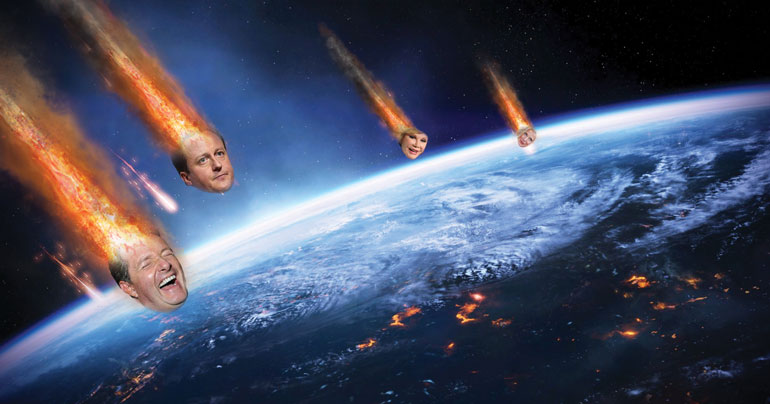 Tonight’s meteor shower is set become the most watched in human history, after all the space-rocks involved were named after infamous celebrity douchebags in an attempt to make it more appealing to the general public.

The event happens every August as Earth passes through the tail of a comet, however statistics show most folk can’t be arsed to go outside to watch it, preferring instead to either not give a shit, see it on YouTube later, or watch Armageddon on Netflix.

“We wanted to raise awareness of this beautiful annual spectacle!” said Professor Phil Moon from EurMagh Observatory. “So we’ve painstakingly renamed all the fragments after an assortment of famous dickwads – Piers Morgan, Nigel Farage, Katie Hopkins, Sammy Wilson and the like. We now expect folk to come out in droves to see our new annual ‘Shower of Bastards’ extravaganza!”

Bastard selection has been handled in-house this year, however Moon revealed that next year voting will be thrown open to the general public. “We’re in advanced talks with ITV about a phone-in show hosted by Professor Brian Cox,” he explained. “It will be called ‘Shower of Cox’, and people will be able to nominate which bastards they want to see burn up in space each year.”

Meanwhile scientists in Switzerland also hope to promote their work by unveiling a new device which will propel members of Northern Ireland’s various paramilitary groups towards each other at the speed of light.