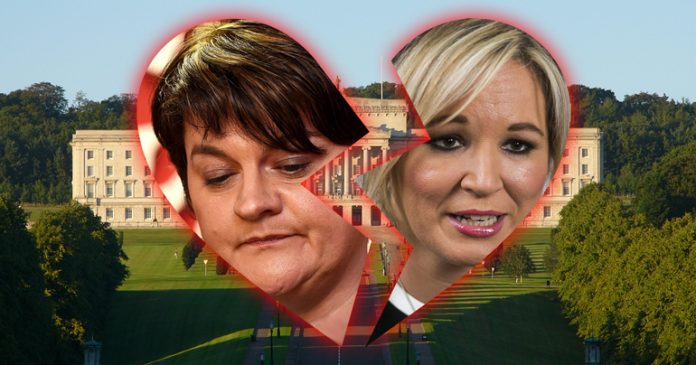 There was sad news this Valentine’s Day as one of the world’s most romantic couples – The DUP and Sinn Fein – announced that they’d split, “for good this time”.

The couple, who’ve have had a stormy ‘on-off’ relationship since 2007, having been living apart for a number of months, but there had been hopes that they’d get back together for the sake of the children, pensioners, unemployed and hospital patients of Northern Ireland.

Sadly their differences were too much, although mutual friends have been doing their best to get them talking.

British Prime Minister Theresa May revealed that she’d called round to see Sinn Fein this afternoon. “I popped into Connolly House with a box of chocolates and a bottle or two of Chardonnay,” she told us.

“They were putting a brave face on it, but you could tell they were hurting – just sitting in a corner playing break-up songs over and over, like Ourselves Alone Again (Naturally) and RHI Smoke gets in your Eyes.”

Her Irish counterpart Leo Varadkar said that he’d texted the DUP this afternoon. “I just sent a wee message to see how they’re coping,” he told us. “All it said was ‘U Ok Hun?’, but all I got back was a whole torrent of abuse about how I was being sectarian.”

Ulster Fry agony aunt Boys-a-Dear Deirdre believes that the two parties will take time to get over their latest break-up.

“They’ll both be feeling very bitter and angry at the moment,” she said.

“So no change there then.”